If it looks like a mashup of methods, it can probably be considered a New School tattoo. It’s a style that started in the 1970s in the USA. But it’s not solely an American phenomenon like Old School tattooing.

If you compare Old School vs. New School tattoos, you’ll see a radical difference. Although both use bold outlines, New School has more vibrant colors, depth, and exaggerated designs. The newer style is open and creative.

Let’s take a look at the best new school tattoo ideas you need to check out. 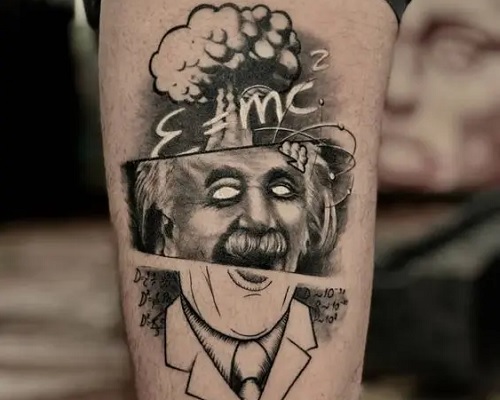 Is it a portrait? Yes. But is it a cartoon? Also yes. (Did Einstein have an equation tattooed on his forehead? No).

We love this hyperrealistic and surrealistic image of the world’s most famous scientist. It’s so beautifully shaded that it looks like it could peel right off the skin. It’s a perfect introduction to New School tattooing. 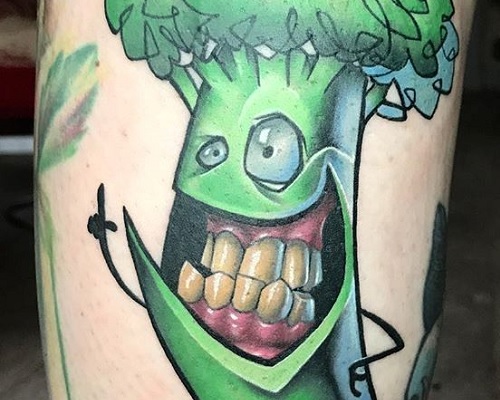 Whenever you see an exaggerated cartoonish tattoo like this, it’s New School style. Moreover, you can identify the artist because of the teeth. It was created by Josh Peacock.

Now we’re curious if the tattoo belongs to a dentist, a nutritionist, or somebody’s mom… In any case, it’s hilarious. If this broccoli runs for president, it’s got our vote. 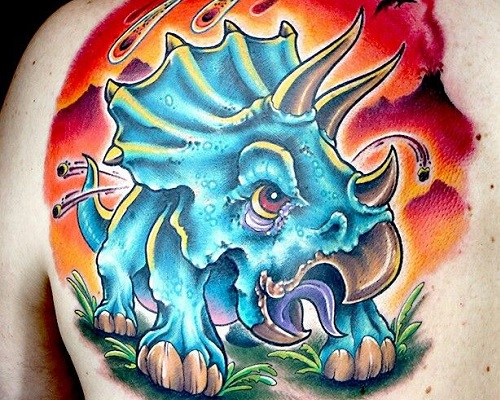 If you watch Ink Master, you might have seen Jime Litwalk doing this masterpiece for the Cleen Rock One Challenge. It’s bright and emotional, evoking pity and respect for the fierce little dinosaur potentially facing extinction. He looks angry and annoyed about his impending doom – or maybe it’s the bits of volcanic rock or meteorite bouncing off his armor. 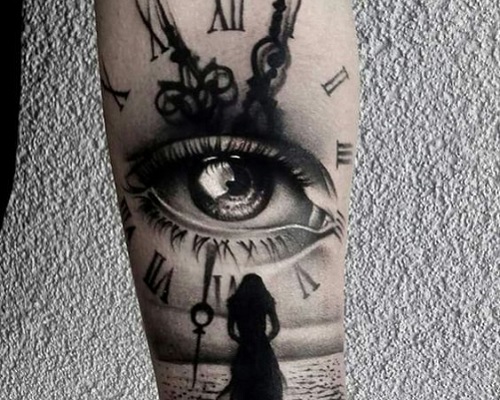 Is it a horror theme or a salute to someone who has passed on? The shadowy depth of this black and gray tattoo could hide a million meanings. You could lose hours peering into the eye, wondering if it represents the moon, and pondering how the upper eyelashes are neatly groomed but the bottom ones look like Roman numerals. And who is the woman walking out to the water?

This is an excellent example of the New School style even though it’s not colorful. It’s also sure to be a conversation starter. 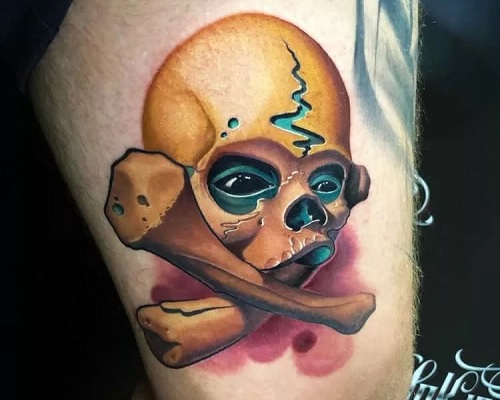 This is not your typical skull and bones tattoo. In fact, this isn’t even a human skull. It looks like an alien is peering out of it. However, the interesting palette of colors and the unusual subject matter make it a prime example of the New School style. 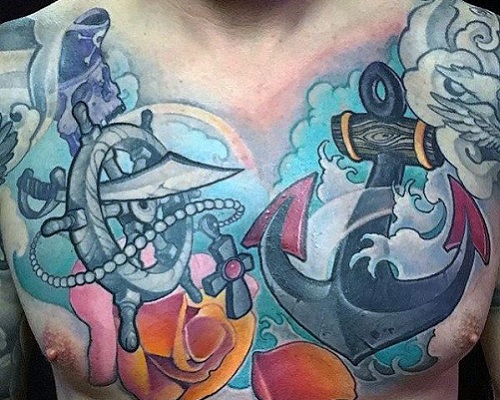 Irezumi is the intensely decorative style of Japanese tattooing. You can see its influences in this nautical New School tattoo. There are so many intricate details (like the wood grain and pitted texture on the anchor) even though it looks a little cartoonish, too.

You’ve got the pirate skull behind the wheel with a sword and treasure facing off with an anchor in the boisterous sea. It almost looks like there’s a rainbow breaking through the storm clouds in the background.

New School tattoo on the back 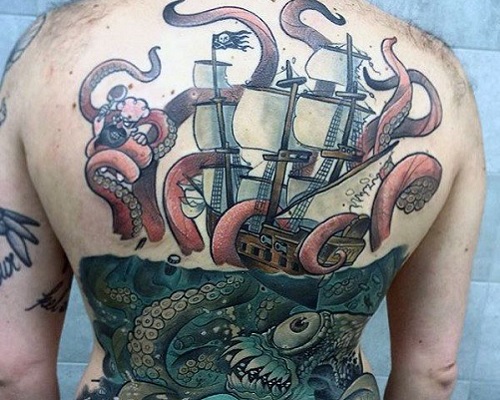 Yo ho ho, this enormous tattoo would’ve taken hours in the chair. It tells the age-old tale of a sea monster attacking a ship. However, the underwater monster looks a bit anxious. After all, he’s grabbed hold of a pirate ship. The fellow in his tentacle doesn’t look like he’s going to go down easy.

When you’re shopping for a new tattoo, never hesitate to look at the artist’s portfolio. If you’re going to commit this much time and money to a masterpiece, you have every right to find an artist worthy of the task.

You might also want to consider placement. The photo makes it obvious that the tattoo collector had to shave before getting inked. He may have committed himself to hair removal for the rest of his life. 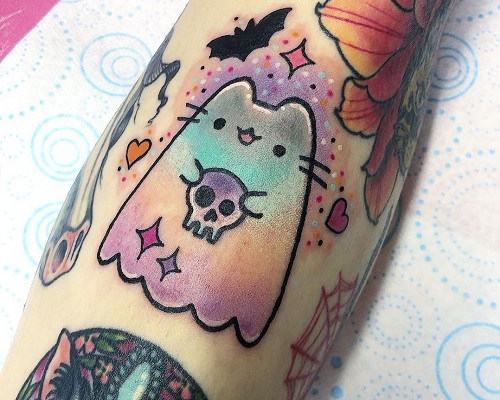 Pusheen would be proud of this Halloween-themed New School tattoo. It’s so kawaii it’s squee!

Check out the beautiful shading and blending of iridescent pastels plus the white highlights for a bit of depth. Another great example of New School tattooing with a nod to Old School art. 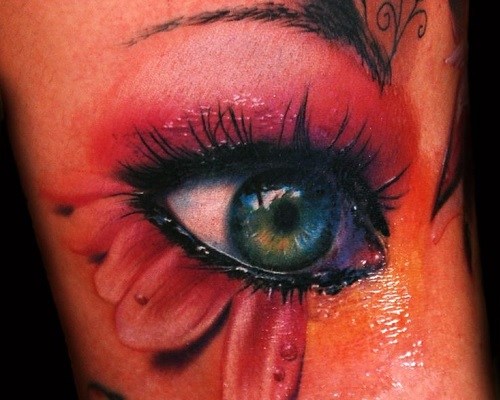 There’s still lubricant on the skin and it looks like tears from this perfectly executed eye that’s so realistic it seems to be peering out of the flesh. The 3D effect is enhanced with the flower petals lifting up underneath it. Notice the reflection in the iris. What an eye-catching tattoo! (Sorry, we couldn’t resist. But maybe you saw it coming). 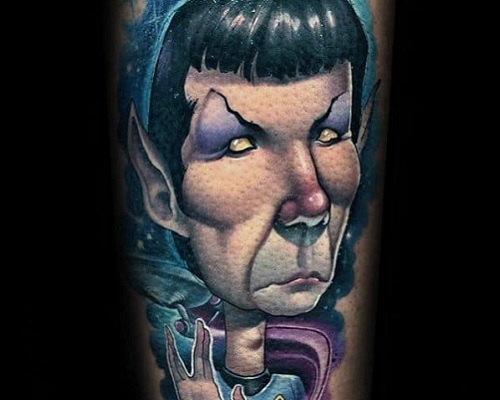 Spock is hoping that you live long and prosper with your new ink. Science fiction, fantasy, and pop culture are frequent themes in New School tattoos. Pretty much anything is fair game.

We wonder what Leonard Nimoy would think of this one. 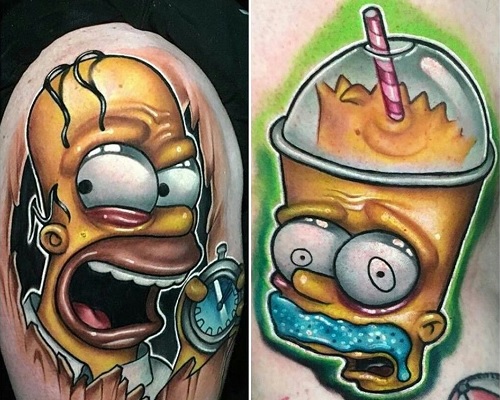 This is the kind of New School art Bart would like best. But it looks like he has a brain freeze at the moment. His dad, meanwhile, is freaking out over the time. Maybe this is from an alternative reality where Matt Groenig is a tattoo artist. 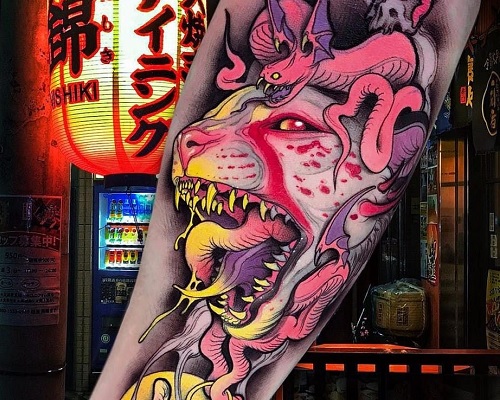 It looks like a comic book tattooed on your arm or leg. This is an example of Japanese-inspired New School tattooing. It’s got vibrant colors, depth, emotion, and exaggeration. The only thing that could make it wilder is UV-reactive ink.

We’ll just leave this here to wrap up. We hope these New School ideas helped you get started on your next tattoo.