Do you love science? Then check out the best atom tattoo designs right here. They reveal the secrets of the universe right on your carbon-based body.

Although you might think an atom tattoo’s meaning is cut and dried, the symbolism can vary as widely as a quantum-leaping quark. They range from a simple hydrogen atom tattoo with one lonely electron circling it to an intricate blending of physics with mythology.

Collectors might place a discreet carbon atom tattoo where only they can see it. It reminds them of their own mortality as well as the cyclic nature of life and the universal nature of their being. After all, we are all born from the death of a star.

On the other hand, someone might prefer to blaze a beautiful watercolor atom tattoo where everyone can see it. They turn their own body into an announcement that science is supreme.

If you haven’t decided yet which atom tattoo design suits you, we hope these tattoo ideas excite your neurons to a higher level. 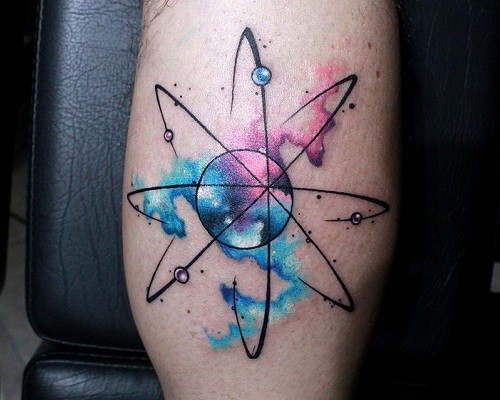 If I had this tattoo on the back of my leg, I’d wear shorts every day to show it off. The gorgeous blending of the red and blue and the little black speckles remind me of a nebula in the night sky. The four orbiting electrons might signify the element beryllium, but I didn’t get a chance to ask if that was the case. If so, it’s an interesting choice because beryllium is a rare, very strong, and lightweight earth metal.

Secrets of the universe atom tattoo 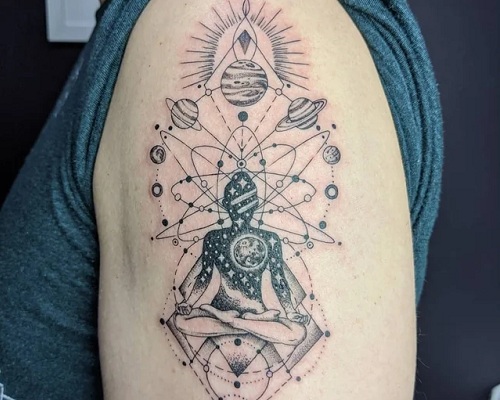 There’s more to the universe than meets the eye. Take dark matter and dark energy, for example. This intriguing atom tattoo features a person meditating on the interconnection of everything. It’s a galactic mind meld as we are also much more than the sum of our parts. Could enlightenment be linked to the path of the planets? 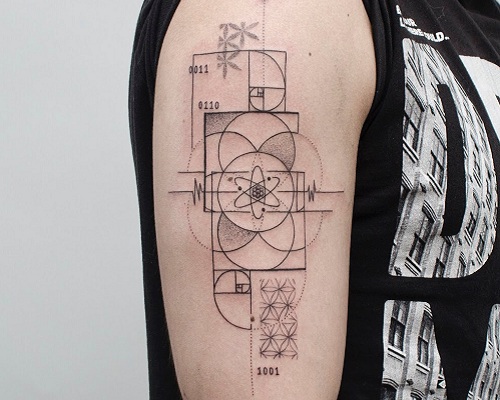 There’s so much going on in this atom tattoo that we weren’t sure how to classify it. There is binary script alongside nakshi kantha patterns and electrical engineering symbols, all of which are framing a Bohr model of the atom. The clear line work and careful dotwork shading are restful for the eyes and stimulating for the mind. 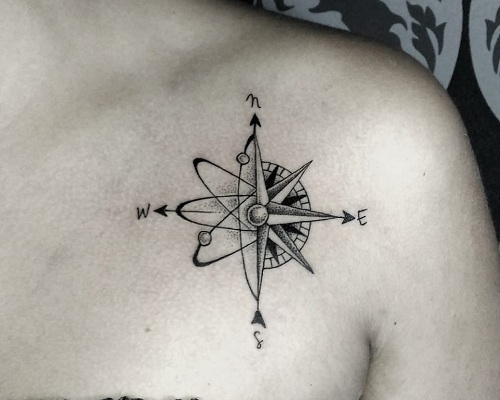 Collectors often ask for the symbol of the compass and the atomic structure to be represented in the same tattoo. When I asked why the answers I got were intriguing. One person said that the two together symbolized finding their way on every level of life. Another explained that it was to remind them to be true to themselves no matter what. 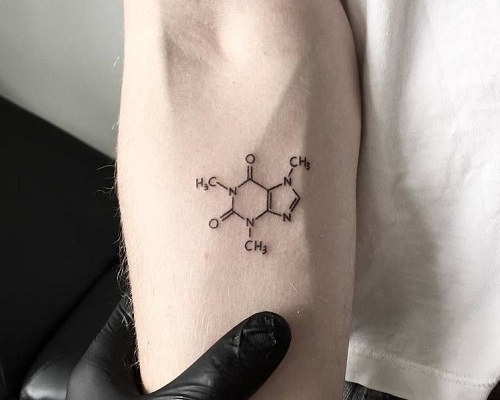 Here is the chemistry symbol for caffeine – notice the bonds between the carbon, hydrogen, oxygen, and nitrogen atoms that put your brain on high alert. I always admire artists with such a steady hand that the smallest notation is as clear as print. As I understand it, this is a hand-poked tattoo. That fact makes the simple but distinct molecular structure tattoo all the more appealing.

Science tattoo with an atom 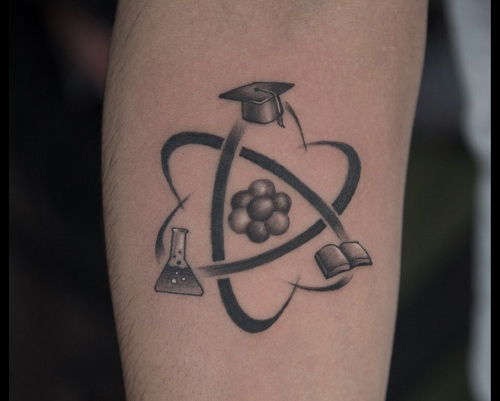 Should you get this one before or after you complete college? Since the tassel is on the left side, we assume that this collector finished the course and got their degree. How much do you want to bet that they majored in chemistry? 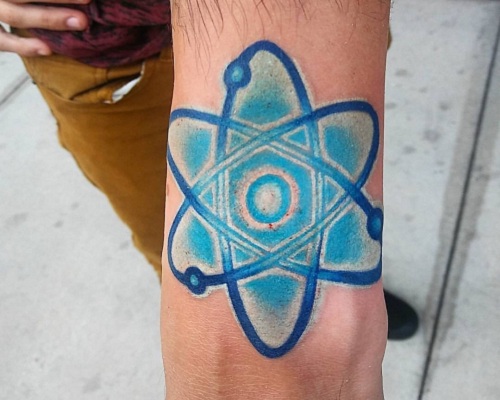 What an excellent color choice! This eye-catching blue tattoo pops with atomic energy. It should give the wearer a jolt of power every time they look at it. The shading is beautifully done, giving it a 3D look. The placement on top of the forearm puts it in plain view for everyone to enjoy.

Evolution tattoo with an atom 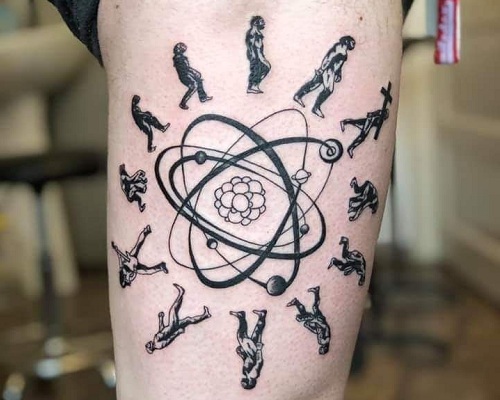 Watch as we evolve from ape to rock star. The outer edge of this tattoo is based on the iconic “The March of Progress” image created by artist Rudolph Zallinger. Then, the inner part consists of a somewhat whimsical atomic model complete with a ringed planet in orbit. All in all, a fun tattoo that’s sure to be a conversation starter. 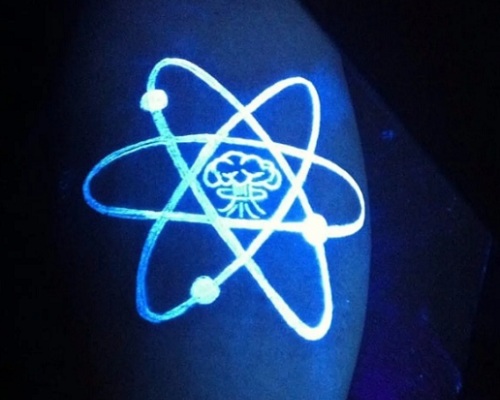 Perhaps I should call it an atomic tattoo because of the mushroom cloud in the middle. That’s already a fascinating choice, but what if I point out that there are three electrons orbiting the nucleus? The third element on the Periodic Table is lithium, a well-known antipsychotic medication. Now, the meaning of the tattoo gets even more interesting, doesn’t it?

Nota bene: if you want to get a UV-reactive tattoo like this, be sure you go to an artist with experience using this type of ink. Depending on the color, it will probably look pastel during the day, but bling like a Las Vegas hotel under black light. On the downside, it may need touching up after a few months to maintain its brightness and clarity. 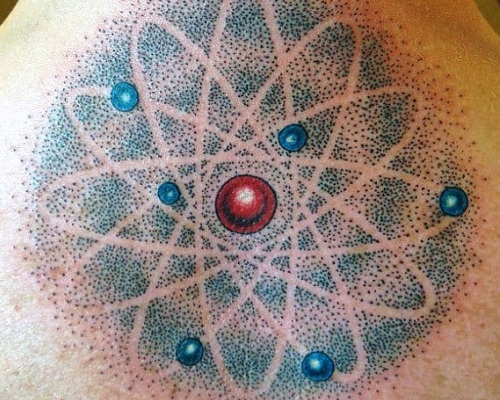 Somebody has a lot of patience, don’t they? This is a spectacular piece of pointillism, something that Georges Seurat would smile at. It’s also potentially more scientifically accurate simply because we know electrons live in a cloud – they don’t have a fixed orbit around the nucleus.

It has beautiful depth and a jewel-like realism. Count the electrons – this is a carbon atom tattoo. 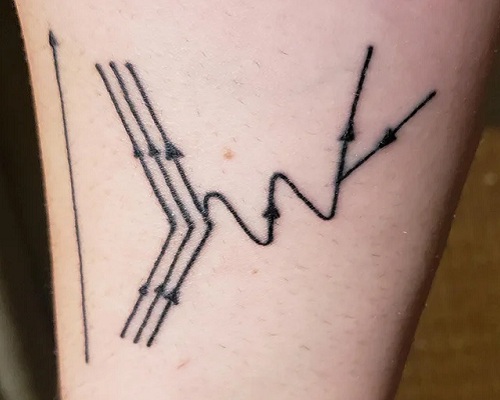 Let’s wrap up with the ultimate geek atom tattoo of all. It’s based on a pictorial representation created by physicist Richard Feynman that describes the beta decay of an atom. Specifically, it shows an electron or positron and a neutrino emitted from a nucleus during radioactive decay.

If you’re looking for that special someone, and they recognize this atom tattoo, you’ll know instantly that you’re on the same wavelength.

How much does an atom tattoo cost?

Tattoo prices vary based on the size, color, and originality of the design. A small tattoo – black ink only with minimal or no shading, might be 50 bucks plus a tip for the artist. But a sleeve tattoo with an original design might run as much as $2000. In any case, tattoo artists can give you an estimate once you have an idea of what you want.