It’s all about death, pure and simple. The skull and scythe tattoo means time’s up, your ticket’s getting punched, and now you’ll be pushing up daisies. So why would anyone want this morbid tattoo?

The reasons vary – some collectors like having the reminder that life is short. It’s a memento mori to motivate them to live now. 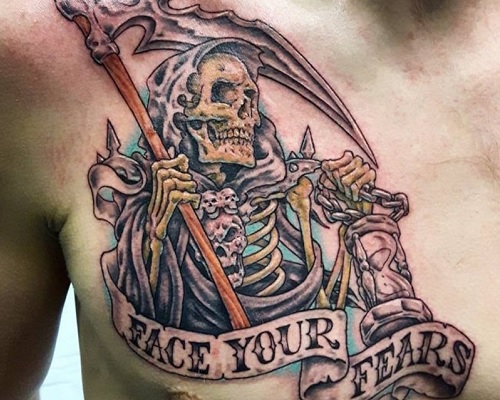 Others might get a death reaper tattoo to honor someone they lost. Then there are goths and those who think that the Grim Reaper tattoo looks cool. In any case, it’s definitely a conversation starter.

What else do Grim Reaper tattoos symbolize? 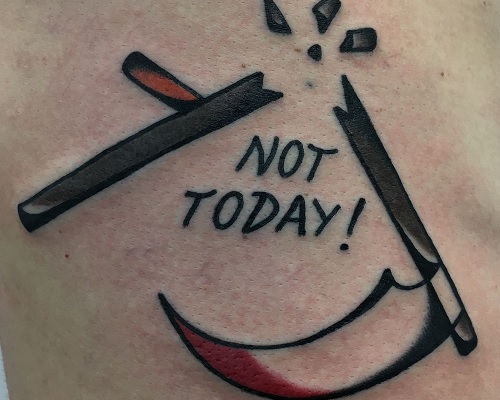 The scythe that Death holds in a classic Grim Reaper tattoo represents cutting the connection between the soul and the body. Then, the skeletal figure itself will lead the soul to heaven or hell. But could there be a deeper Grim Reaper tattoo meaning?

What if it could represent leaving something harmful behind, like recovery from addiction? Or what if the tattoo symbolizes victory over illness, like remission from cancer?

As you search for inspiration, don’t let anyone limit you to black and gray Grim Reaper. There are all sorts of tattoo styles and ink colors to choose from. You’re the canvas, so work with the artist to create the image you want.

And don’t get hung up on the tattoo’s meaning, either. If you just love the way it looks, that’s perfect.

Should you get a Classic Creepy Reaper or Cartoon Reaper? 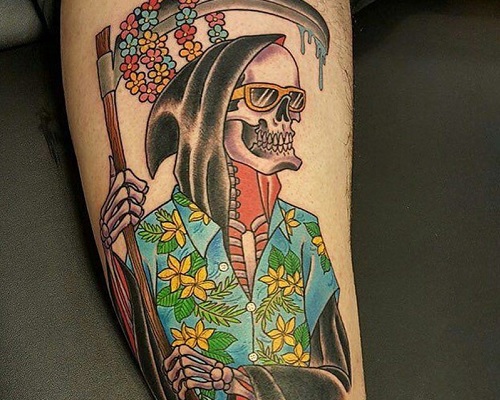 The tattoo below takes the classic skeletal Death holding a scythe and turns it into the Grim Reaper on vacation. Instead of blood dripping from the blade, it’s blue water. 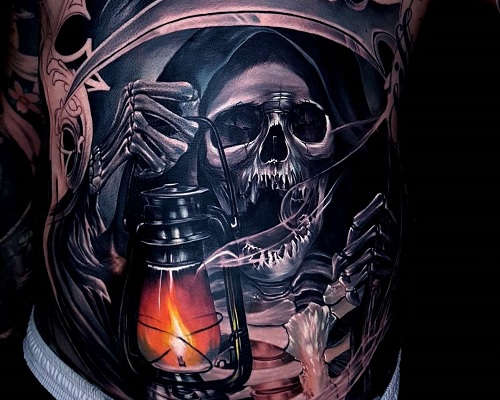 We love this black and white portrait of the Grim Reaper that just jumps off the skin. With his scythe in one hand and a lantern in the other, he seeks those whose time is up. If we saw this tattoo in person, we’d be divided between stepping closer for a better look and running away screaming. 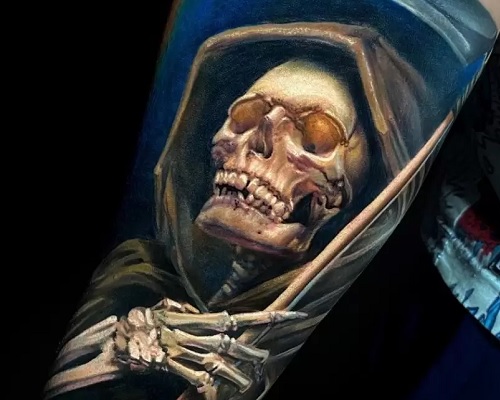 Here’s another frightening image of Death laying in wait. What does he see from those sightless sockets?

Consider something like this if you want a Grim Reaper sleeve tattoo. 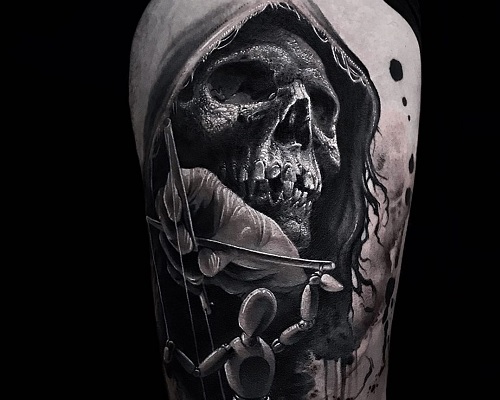 Who pulls the strings? It’s a human hand manipulating the anonymous marionette, but it’s the grinning skull of Death lurking behind.

It makes us contemplate the uselessness and horror of war. 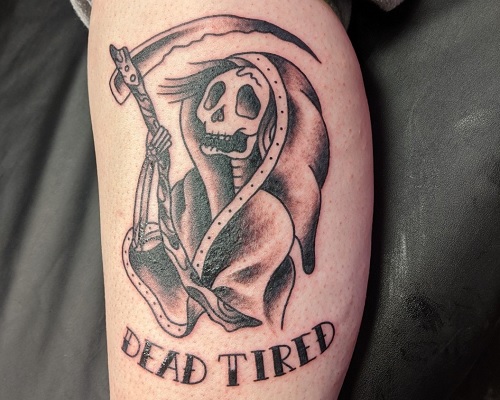 This Grim Reaper has feminine characteristics. The script underneath makes us think that the wearer is someone that has faced immense challenges and is completely exhausted.

Oddly, we feel a sense of hope when looking at it. It’s because the Reaper has her scythe raised high. She hasn’t quit even though things are hard. 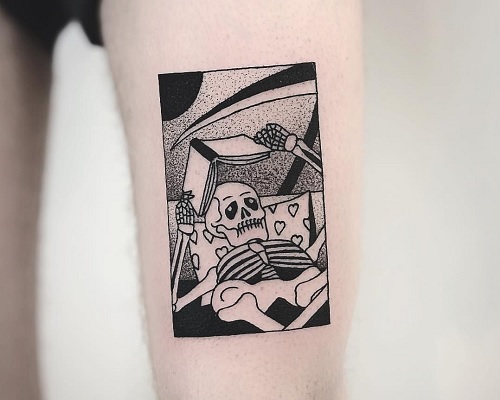 This geometric reaper tattoo is charming, down to the detail of the little hearts on the pillow. Here, the Grim is resting with a book and his scythe propped on the wall behind him. We’re wondering what he’s reading – is it The Graveyard Book or From Here to Eternity? 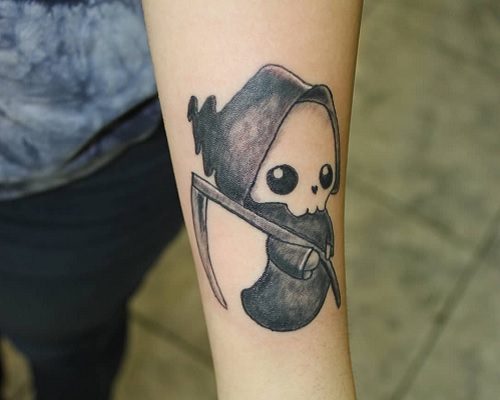 Aww, who could be afraid of such an adorable little Death? It’s so lonely. Go hold its little cold hand and play. 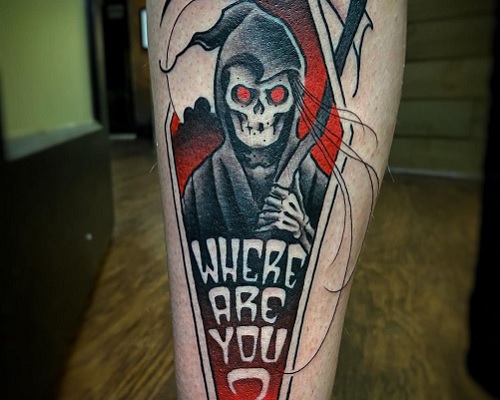 From inside the coffin frame glare the red eyes of Death. He’s looking for you. We love the dramatic red and black styling of this reaper tattoo on a leg. 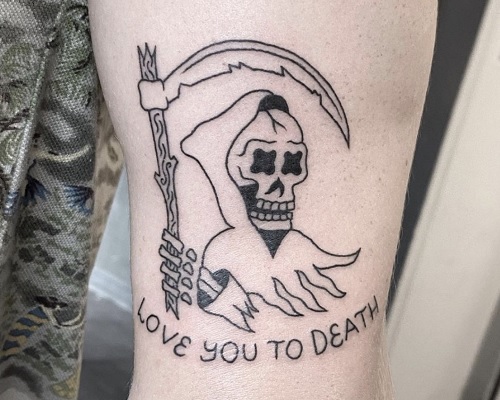 Did someone get this black linework reaper tattoo after getting married? Or is there another message here? 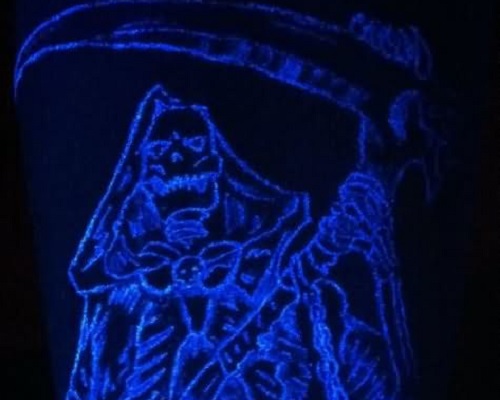 Technically, no, this tattoo is only bright under black light. The UV ink outlines a menacing Grim with a hapless maiden at his feet. 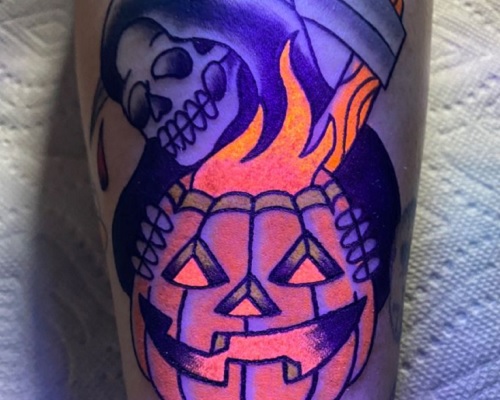 Here’s another bright grim that fluoresces under black light. It’s ideal if you happen to be a fan of Halloween, too.

If you’re going to get a UV-reactive ink tattoo, please choose an artist that has experience doing them. UV ink is tricky to work with.

Grim Reaper with a gun tattoo 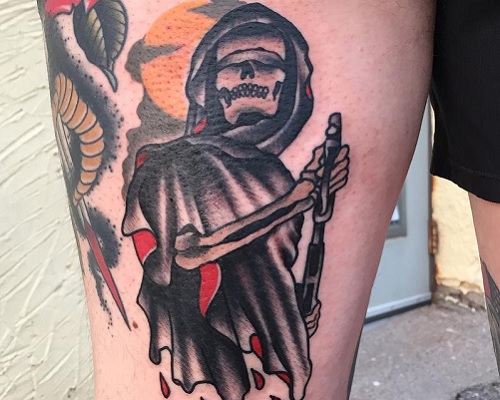 The traditional Grim Reaper tattoo features a scythe, the harvesting tool with a wicked curved blade. But there’s no rule that Death can’t carry a gun. This one has an automatic rifle and blood appears to be dripping from his robe.

It’s also interesting that the skull is blindfolded similar to how Justice is represented in art.

The Reaper’s coming for you tattoo 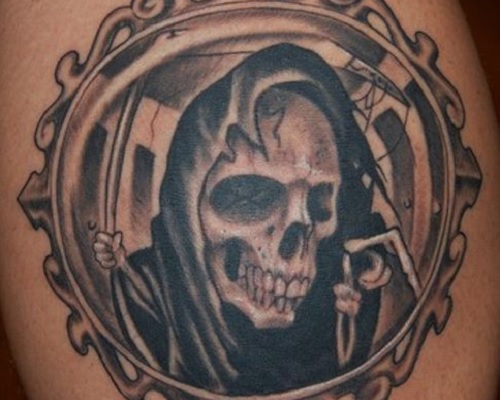 At first glance, it kind of looks like the Grim Reaper is looking into a mirror because of the decorative frame around the edge of the tattoo. But look closer at the convex image. There are doors in the background. This is Death ringing your doorbell.

We like this Neo traditional grim reaper tattoo black and white with impeccable gray shading. We even think it’s a little humorous.

Does it matter where you place a Grim Reaper tattoo?

When deciding where to put a reaper tattoo, you only need to consider two things. First, is it private or would you want others to see it?

And second, how big will it be?

It’s hard but not impossible to place a reaper tattoo on a finger. It’s better on the back of a hand or wrist, and stunning on a bicep or across the chest or back. More canvas means more detail.

Also, keep in mind that some parts of the body are more sensitive to tattooing. The feet and the ribs sting a lot more than arms and legs. Full-color tats and ones with a lot of shading will also hurt more and take longer to heal. But don’t let a little pain stop you from getting the tattoo of your dreams.

We hope that we helped you find inspiration for your next tattoo today.