What does a scorpion symbolize in a tattoo? It can mean many things. Intimidation, super strength, control, protection, and sexuality are some of the themes a scorpion represents.

If a scorpion tattoo incorporates other elements like fire or flowers, it can have additional meanings.

Consider the scorpion in nature. One sting from its tail can disable or kill an enemy or prey. Some scorpions are huge and menacing while others are tiny and nearly invisible, but still deadly.

When they mate, the male scorpion holds the female’s pinchers and dances with her. That’s why a scorpion tattoo on a man might mean potent sexuality.

So, why do women get scorpion tattoos? It’s because even the smallest scorpion is fearless and should be treated with respect.

Learn more about the best scorpion tattoo for both men and women below.

There are many different types of scorpion tattoos, from 3D realistic to abstract, geometric, and minimalist. The design you choose might be based on what you want to communicate with it. It might depend on the types of tattoos you already have, where you place it on your body, and even your budget.

Although different species of scorpion exist in the wild, they all share certain characteristics like powerful pinchers, deadly stinger, and venom. This is why they are a symbol of toughness and strength as well as danger, death, and fear.

Many times a scorpion tattoo will use the stinger as the focal point of the design. The artist may place something symbolic there like a heart, flames, or a rose.

What the scorpion tattoo means for men

Scorpion tattoos tend to be more popular with men because of the powerful imagery. They represent might, virility, courage, and self-defense. Due to the famous mating dance that scorpions perform, the tattoo also stands for seduction, passion, and male sexuality.

What the scorpion tattoo means for women

Although women seek out scorpion tattoos less often than men, when they do, it’s often because the scorpion symbolizes the power to fight back. It may also serve as a warning to not be deceived, that this woman is not to be fooled with. However, there are other meanings that might inspire both women and men to get a scorpion tattoo.

We’ve heard that a scorpion tattoo warns others that a gang member is an enforcer or contract killer. In Russia, it could symbolize that the wearer has been incarcerated.

The Greeks brought us the story behind the constellation Scorpius. Zeus placed Orion and the deadly scorpion sent to kill him in the heavens to remind feeble mortals about the dangers of being too proud.

Best Scorpion Tattoo for Both Men and Women in 2023

Black and white scorpion tattoo with a snake 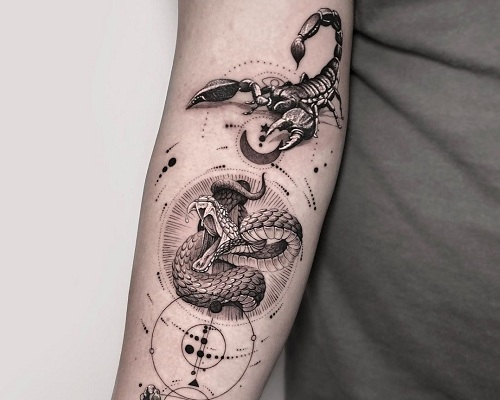 Both scorpions and snakes are fearsome. These venomous creatures will defend themselves to the death when provoked. What could be more intimidating than a stunning black and white scorpion snake tattoo? The only thing that softens the blow is the interesting geometric symbols interconnecting the creatures. 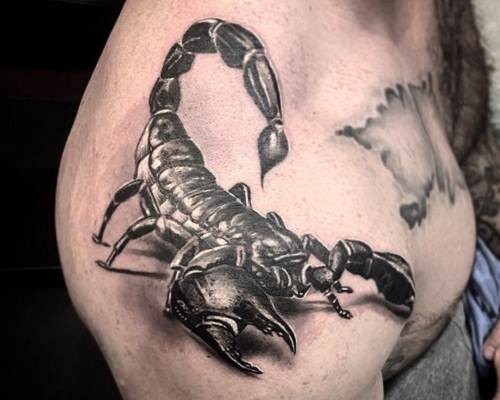 How would you like to have a pet scorpion on your shoulder? It’s hard to resist realistic tattoos with a 3D effect like this. It looks like at any moment the scorpion could spring into action in your defense. 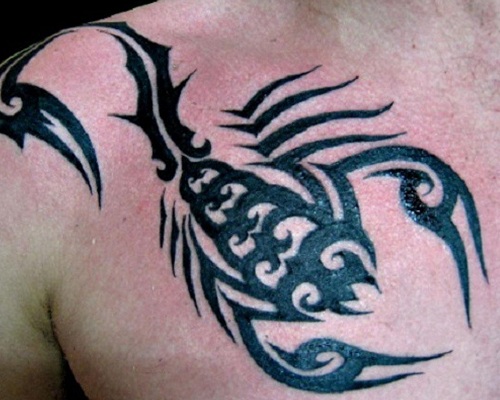 Attractive tribal tattoos like this one are a defense against evil spirits. The crisp black ink and bold lines make for a tattoo that will endure for decades. 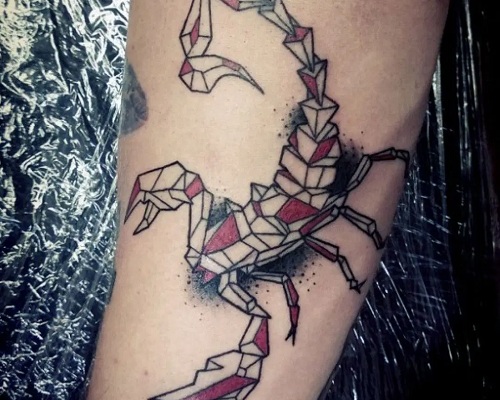 It looks abstract, but the scorpion is still fully recognizable. Could this be a Minecraft beast? At any rate, it softens the blow, letting the tattoo look powerful without being frightening. 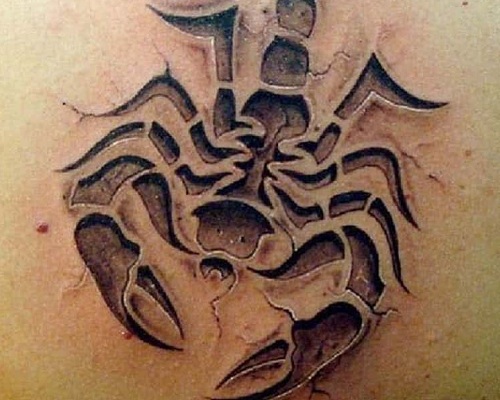 We also had a soft spot for this other hyperrealistic yet geometric tattoo. It looks like an archaeological find left behind by an ancient culture. 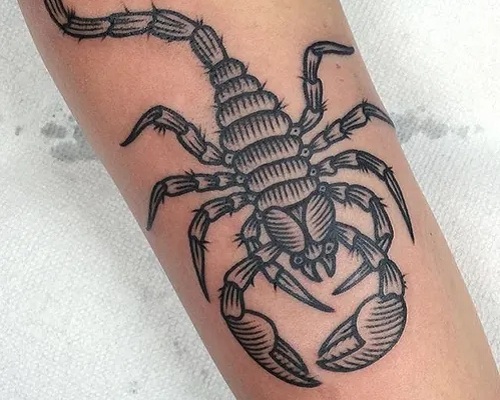 Here’s a scorpion with old-school charm. It looks like a woodcut illustration from a 15th-century book. 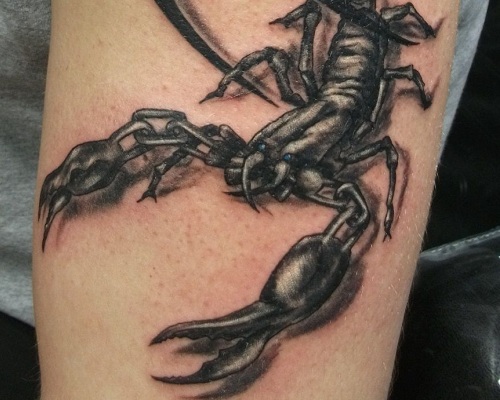 What tattoos do Scorpios get? It goes both ways. They may choose an actual scorpion or go with the zodiac symbol. We’d love to know if famous Scorpios like Gordon Ramsay, Katy Perry, and Lil Peep have scorpion tattoos.

In any case, a scorpion tattoo is a perfect fit as Scorpios have a reputation for being sensual, secretive, brave, devoted, and ambitious. 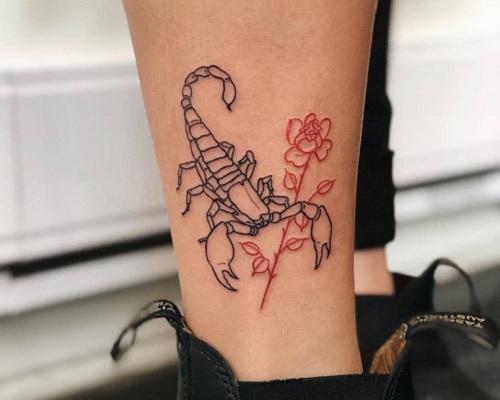 What if you see a scorpion holding a rose, or with a rose instead of a stinger? We’ve heard it means that no one can judge you. It may also mean that others should be careful when trying to form a relationship with you because while you’re sweet, you can also sting. 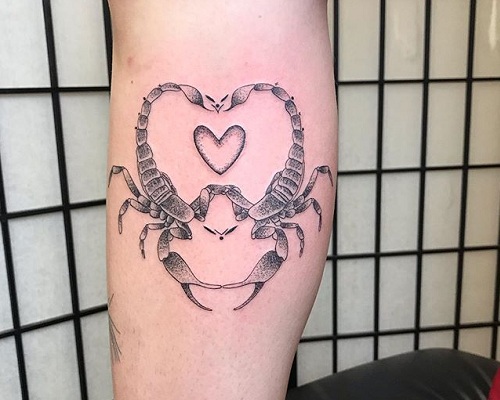 We mentioned the scorpion courtship dance and it looks a lot like the tattoo below. The fine detail shows off the grasping pinchers as the scorpions sway together. Kinda makes you wonder how this relationship is going to turn out.

Scorpion tattoo on a hand 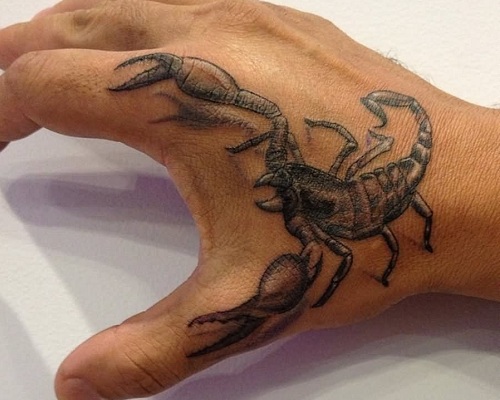 When it comes to tattoo placement, it’s all about being seen. How much attention do you want to attract? Is your scorpion a warning to others? Then ink your hand.

Minimalist scorpion tattoo on a finger 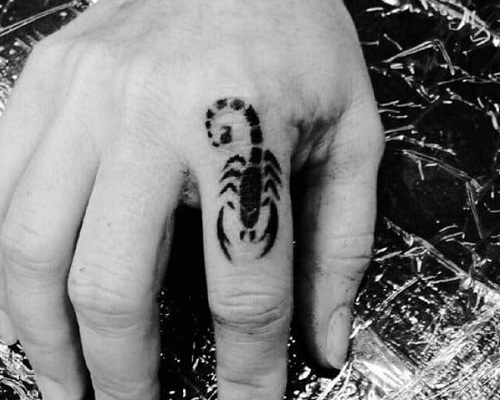 You’ve heard about the tiny little scorpions that hide in shoes. They can be deadly. There’s no reason why a small scorpion tattoo should be any less intimidating.

Scorpion tattoo on a foot 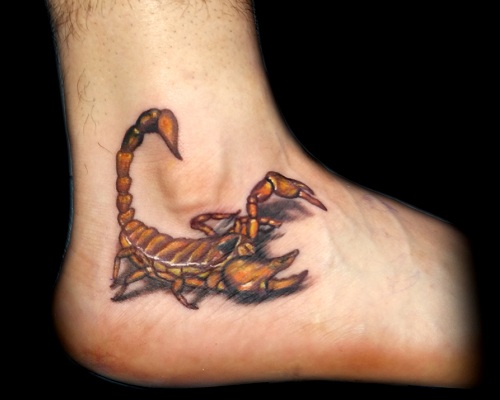 Getting tattooed on your foot hurts a lot. We imagine it might be like getting stung by a scorpion over and over again. Show your mastery over fear by placing your scorpion tattoo on your foot. It’ll be right there to remind you to be brave no matter what comes.