Home » Tattoo » The 13 Best Snake Tattoo Designs: What Does It Symbolize?

Are they something to be feared, or is there a deeper meaning? What do snake tattoos symbolize? We took a look at the best snake tattoo designs to find out.

What do snakes symbolize spiritually?

Across the planet and throughout history, snakes appear in almost every mythology and religion. Although Christianity considers the snake the embodiment of evil, other cultures have a more positive view.

For example, snakes are sacred to certain African and Native American cultures. These creatures represent wisdom, knowledge, creation, and patience.

In ancient Egypt, the reared cobra head symbol was on the crown of the Pharaoh and symbolic of the protection of the god Wadjet.

In Norse mythology, the gigantic serpent Jormungandr is wrapped around the foot of the world tree. When the snake moves, it symbolizes the end of the world. Also, in Nordic tattoos, you might see a serpent in the shape of figure 8 symbolizing renewal after the end.

But in Hinduism, snakes are not so fearsome as the god Indra controls all of them. In this culture, they stand for many different things including desire, infinity, and the brevity of life.

And if you remember Greek mythology, you might recall Medusa who was cursed with snakes for hair. That’s frightening, but the goddess Athena was also depicted with snakes representing her immortality. Plus, the messenger god Hermes carried a staff with two winged serpents wound together. It’s similar to the Rod of Asclepius, the symbol of medicine and well-being.

Lastly, the Aztecs worshiped Quetzalcoatl, the feathered serpent or “precious snake”. He was a symbol of wisdom, power, and energy. 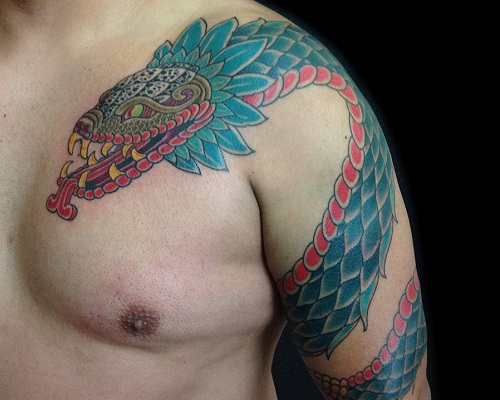 Are snake tattoos better for men or women?

Since snakes have masculine and feminine qualities, they can be worn by any gender. However, some say the snake tattoo meaning on a woman is different than that on a man.

We disagree because we believe that a tattoo can mean the same thing regardless of who wears it. Sometimes, people get snake tattoos as a symbol of danger. Other times, it’s to represent a new start – the shedding of old skin and a rebirth in life.

When you choose a snake tattoo, it might not carry hidden meanings, and that’s okay. As long as you’re happy with it, that’s what matters. Our artists try to provide you with the best snake tattoo ideas then let you choose the art that represents the story you want to tell. 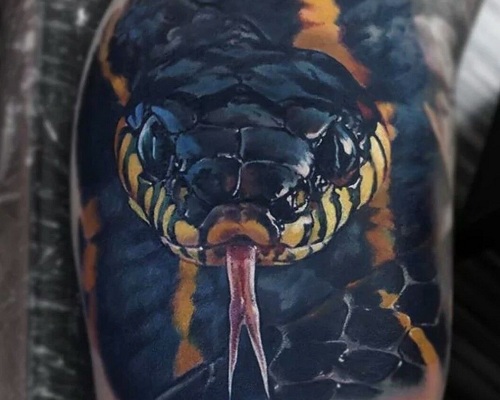 Snakes strike back when threatened, but they are not vicious. They act in self-defense or hunt when they need food. If you want to warn others that you will protect yourself and work hard for what you need in life, then consider a realistic snake tattoo like this one. 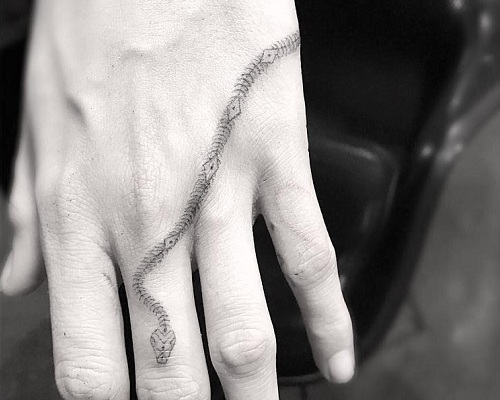 This is Cara Delevingne’s hand with a delicately inked snake tattoo done by Dr. Woo. She said that it stands for “reinvention”, “new beginnings” and “new life”.

The part of the tattoo that you can’t see in the photo has the word “feral”. We think that’s a perfect script for a snake tattoo. 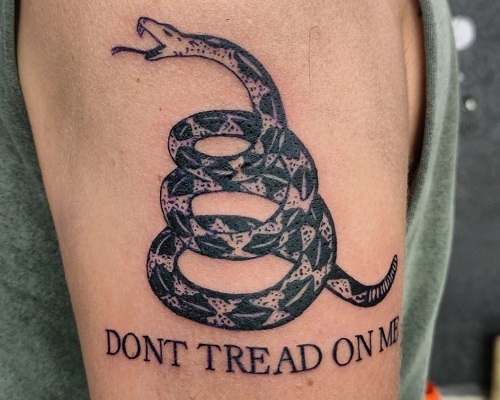 Here’s a big and bold shoulder tattoo with the famous “Don’t tread on me” snake. There’s no mistaking the meaning here!

The well-known symbol on the Gadsden flag was created in the American Revolution. Nowadays, it’s worn by military and gun enthusiasts. 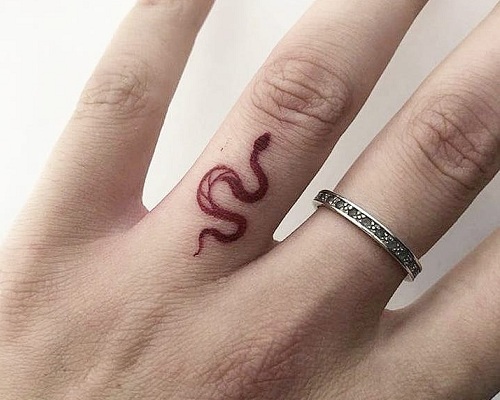 This little red snake symbolizes strength, protection, power, and passion. It might symbolize Kundalini energy if worn by someone with Hindu beliefs. It’s small but sexy. 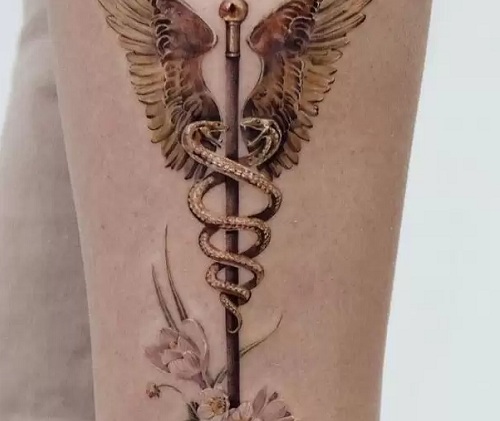 If you see a snake with flowers, it might represent secrecy. It reminds us of that story in the Bible where the snake tricked Eve.

Nevertheless, in this gorgeous tattoo, we suspect that the caduceus and flowers show that the wearer is in the medical field and has dedicated their life to helping others. 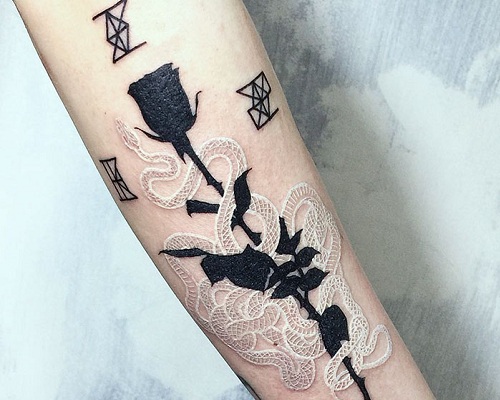 If you think about it, a snake with a rose can represent temptation. That’s why we’re intrigued by a black rose intertwined with a white snake and encircled by geometric symbols. What does it mean to you? 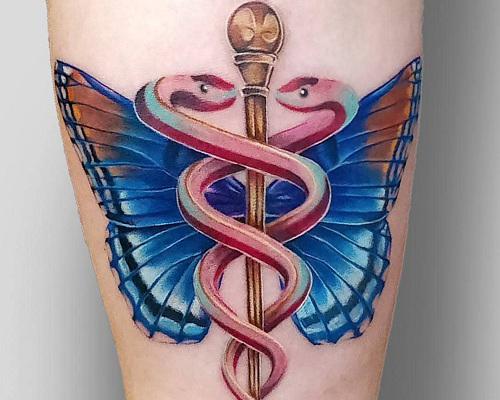 We like the beautiful colors of this watercolor tattoo. It substitutes butterfly wings for bird wings behind the caduceus. It’s like a double symbol of rebirth. 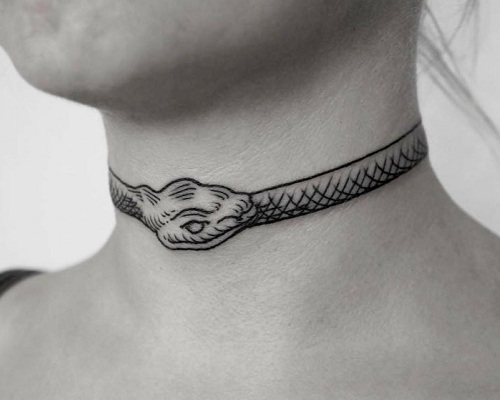 Anciently, more than one culture represents the eternal cycle of life and death with a snake eating its own tail. 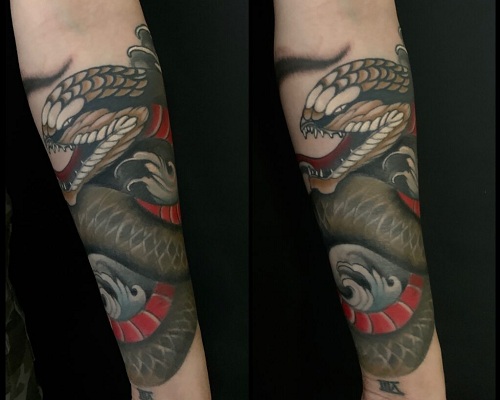 Did you know that in Japan, a snake tattoo can mean good luck? Just like dragons in fantasy novels, snakes guard treasure. Moreover, it can represent knowledge and transformation.

Traditional Irezumi tattoos have a distinct style with specific meanings for different colors. For example, black is wisdom, red is strength and protection, green is energy and youth.

We think that the snake here looks like an appropriately fierce guardian. 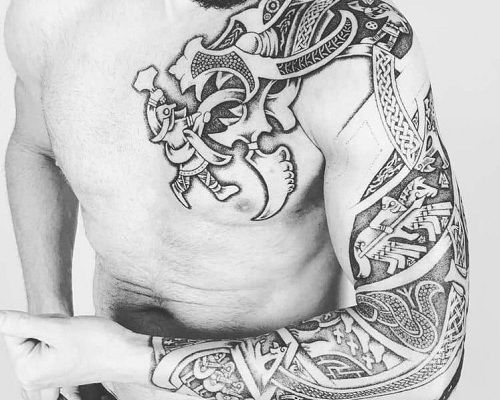 Although they aren’t the same thing, the intricate line work in both Celtic and Norse tattoos make for stunning body art. We could sit for an hour or two picking apart the meaning of this Viking tattoo. 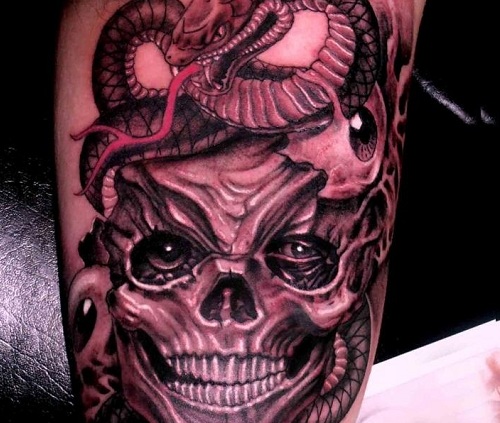 Snakes and skulls aren’t just for pirates. They are an in-your-face reminder of mortality. While the skull reminds us that life is short and we are fragile, the snake gives us hope of rebirth. 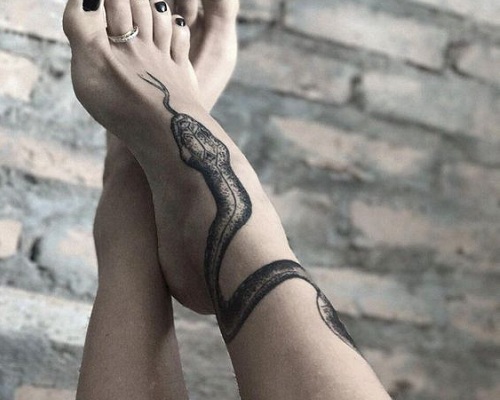 Watch out for this one – she bites! Would you be brave enough to have a snake wrapped around your ankle?

In southeast Asia, cobras are Naga serpents. They are often portrayed as half human, half snake, or a human with snakes on their head kind of like Medusa. However, you can’t just get a Naga tattoo anywhere on your body if you want to be respectful of the culture. It should be placed high above the ground, above the waist at a minimum.