Unicorns have been a symbol of magical beauty for centuries. From children’s stories to today’s tattoos, unicorns remain popular and relevant. If you’re considering getting inked, there are many unicorn tattoo ideas here that will appeal to your mystical side. 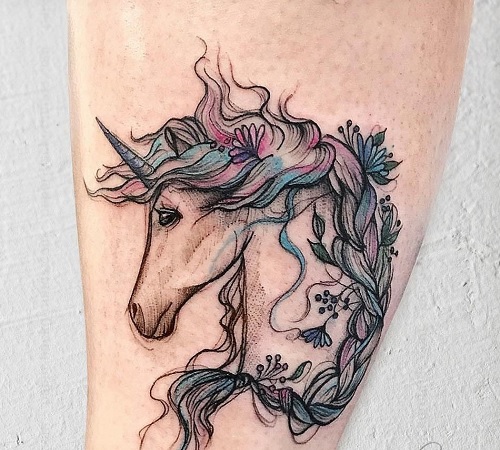 Archaeologists and historians have seen unicorns featured in works of art and literature for thousands of years. They appear in ancient Mesopotamia, India, Persia, China, and Greece. Then, unicorns are part of European art and literature for the past thousand years. Some of the earliest representations looked more like horned goats or cows than horses. And some experts suspect that the single-horned narwhal had a great deal of influence, too.

However they are represented, unicorns represent purity, magic, and even Christ. It’s been said that they can only be captured by a virgin. Plus, they have the legendary ability to purify water and heal with their horn.

Other symbolic meanings include protection from evil, strength, and transformation. The significance may differ whether the unicorn is colorful and cartoon-like or realistically drawn in black and gray. The addition of other symbols like flowers, rainbows, and script also adds to the meaning of unicorn tattoos. 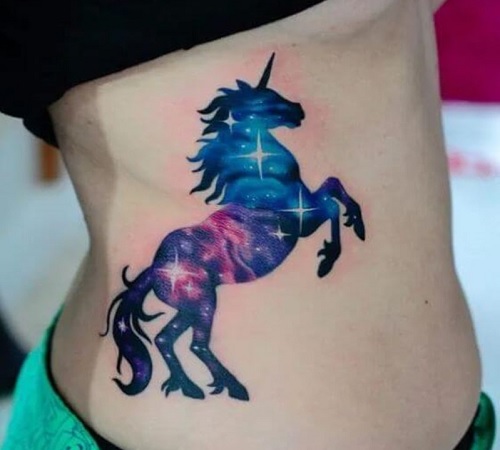 Here’s a star and space-themed design with the outline of a unicorn filled with galaxies, planets, and stars. This tattoo is stunning body art!

The combination of fantasy with elements from outer space creates an enchanting look that brings together two seemingly opposite worlds: fantasy and science fiction, making it something truly magical. 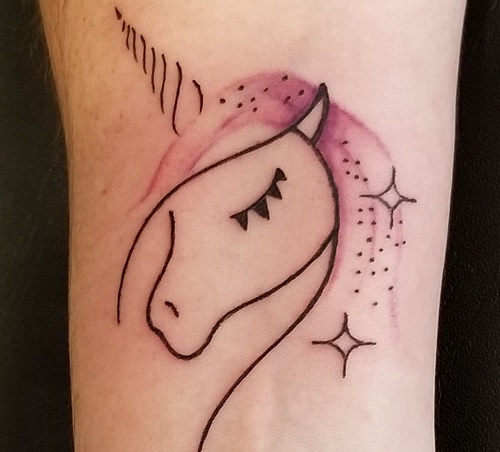 Unicorn tattoos have become incredibly popular in recent years, as more people search for a design that speaks to their individual style. If you’re looking for a tattoo that is unique but still makes a statement, you should consider the minimalist unicorn tattoo. This type of design eliminates the busy lines and intricate details of traditional unicorn tattoos, instead focusing on the basic elements that make up this magical creature. It’s perfect for those who prefer subtlety over bold statement pieces.

What’s more, something like the following design can be resized for placement anywhere on the body. 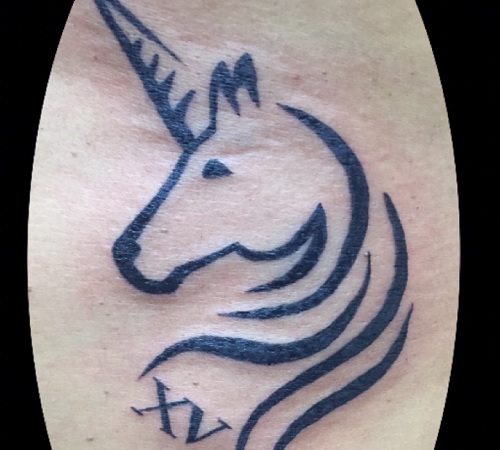 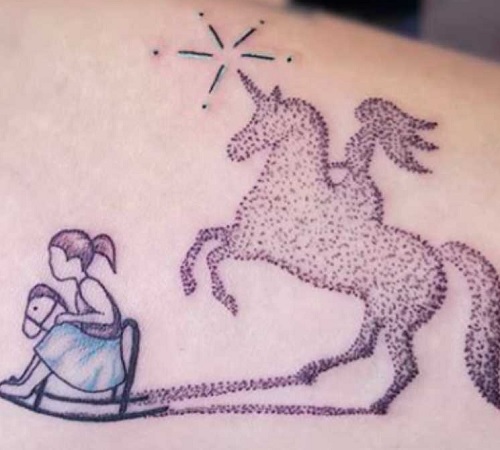 We can’t tell if it’s a stick and poke tattoo or not but we love the story it tells! It’s a striking image that conveys both strength and vulnerability while hinting at magical possibilities within us all. It explores themes such as innocence, childhood dreams, and the power of imagination. The soft pastel colors in the design evoke feelings of nostalgia, while also creating a sense of awe and wonderment.

The rocking horse itself symbolizes playfulness and freedom, allowing the wearer to tap into their inner child. Meanwhile, the woman riding the unicorn suggests the idea that anything is possible if we just believe in ourselves enough. It encourages people to never give up on following their dreams no matter how far away they seem.

The design can also be interpreted as representing growing up and the transition from childlike innocence into adulthood. As we grow older, life’s responsibilities can often cause us to forget our youthful hopes for freedom and adventure. This tattoo is a reminder to not to lose sight of our aspirations along our journey through life. 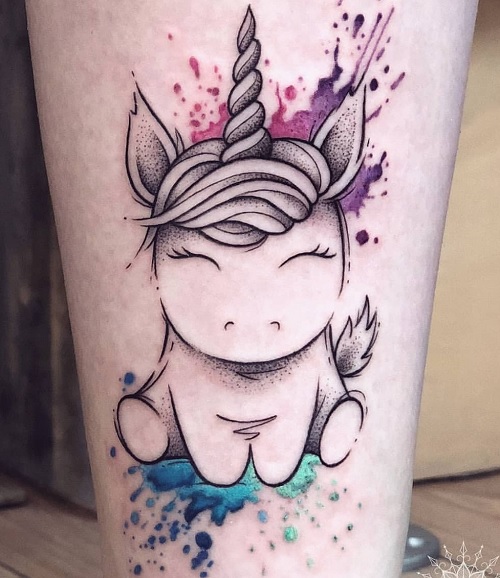 Watercolor unicorn tattoos are perfect for those looking for a whimsical design with splashes of color. They often depict unicorns in dreamy landscapes filled with sparkles, rainbows, and flowers. While some opt for minimalistic designs featuring only the silhouette of a unicorn in pastel colors, others prefer bolder looks with bright hues and detailed elements like stars or clouds. 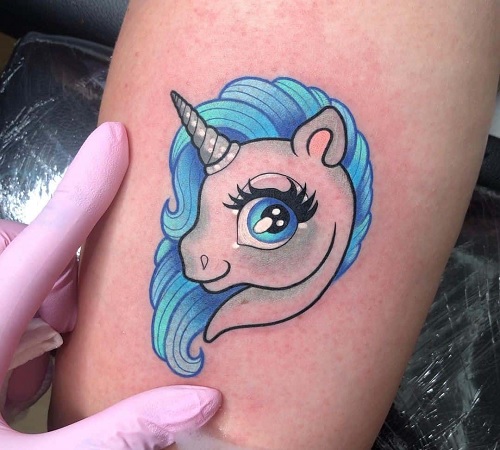 This is one of those tattoos that really stands out in any crowd due to its bright colors and endearing design. The big eyes of this unicorn give off a magical vibe that can’t help but put a smile on your face. The flowing blue mane makes it even more mesmerizing. 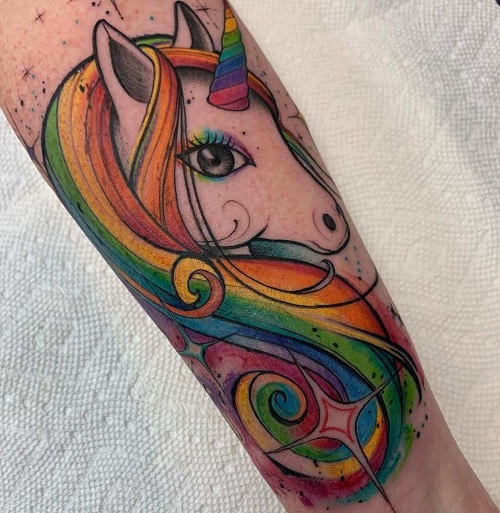 Rainbow-colored unicorn tattoos are frequently chosen by LGBTQ+ fans of the mythological creature. Furthermore, they are simply gorgeous for anyone who enjoys vibrant colors. If you believe in magic, customize it further with stars and symbols to speak your message. 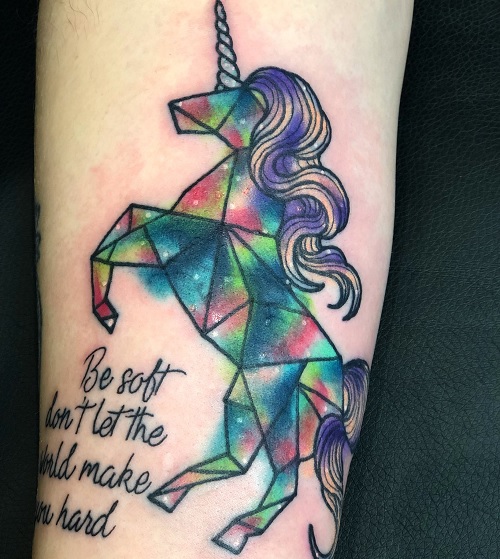 A geometric unicorn tattoo in rainbow colors is a creative way to express your inner sparkle. Speaking of sparkle, check out all the little highlights the artist has added to make the unicorn even more magical.

As you may know, collaborating with an artist to create an original design instead of using tattoo flash costs more. But one of the ways to customize flash and make it yours is to add a script. Hint: ask to see samples of text that your artist has written to make sure you get the style you want. 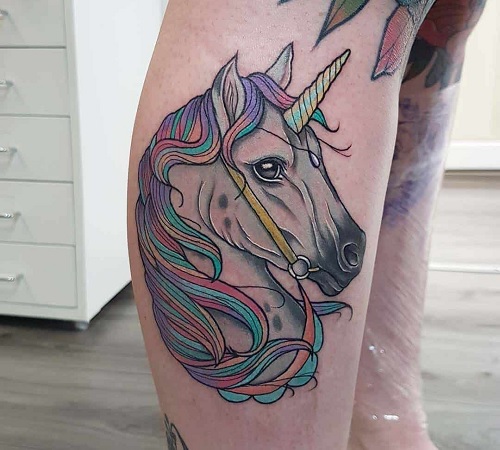 It’s not often that we see unicorns wearing bridles. They are wild creatures, after all. But here, the bridled unicorn may represent the person’s internal struggle for power and control over their destiny. It could also be a reminder to harness your dreams. 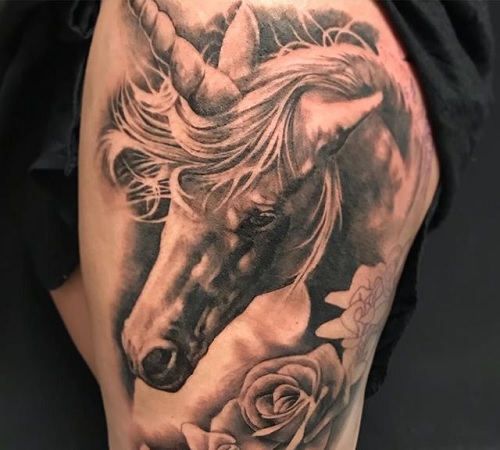 This realistic unicorn tattoo looks close enough to touch. Not only is it a beautiful piece of body art, but it also carries a great deal of symbolism. The unicorn is often seen as a symbol of purity and grace, while the roses are typically viewed as symbols of love and beauty. 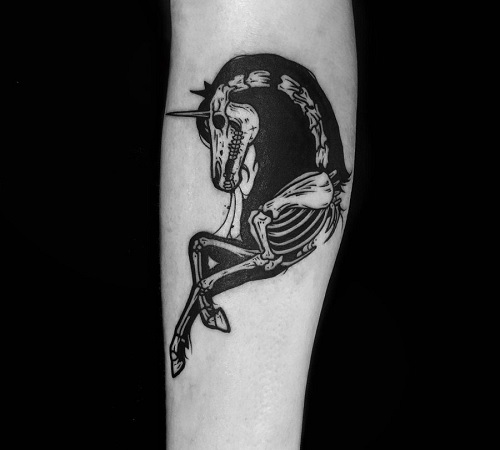 Here is a shocking design that presents the mythical creature with a skeletal structure that can be seen through its body. It’s edgy and sure to be a conversation starter if people have the courage to ask about it.

Some would say this black unicorn tattoo is best for guys, but we disagree. We think it’s an individual choice and gender has nothing to do with it. It can have a wide range of meanings, so if you choose this design, be prepared to explain it.

Unicorn tattoo with a Zodiac constellation 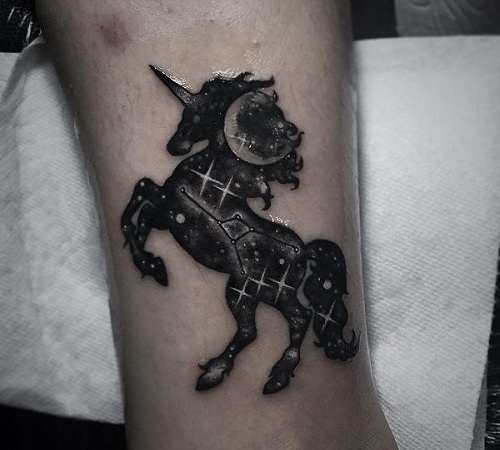 Combine the sparkle of the unicorn with the mystery of the zodiac. Can you identify the constellation on the unicorn’s body? A unicorn tattoo with a starry constellation blends mythology and astrology for a personalized message. 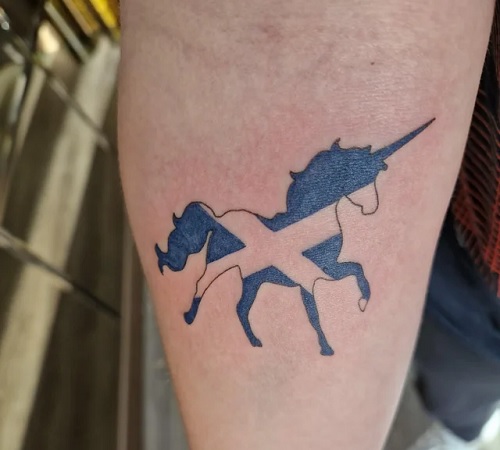 Did you know that unicorns are a symbol of Scotland? In ancient times, the unicorn was seen as the natural enemy of the lion, the symbol of English royalty. Here the unicorn’s body incorporates the Scottish flag.

We hope you’ve been inspired by all of these unicorn tattoo ideas. Take your time choosing your new tattoo. Work with the artist regarding placement and design. Then, you’re sure to be happy with your ink for years to come.