The American Flag has been a symbol of patriotism, freedom, and pride for Americans for over two centuries. It’s no surprise that Stars and Stripes tattoos are popular for showing that you love the good ole USA. And if you’re into patriotic tattoos, we’ve got American flag tattoo ideas just for you. Check out what you can do with the red white and blue.

What does an American flag tattoo mean?

You don’t have to be military to show respect and love for your country. Yet, many vets have American flag tattoos. Sometimes it’s to remember the sacrifice of the fallen soldiers they served with. Other times, the ink represents American ideals like freedom, resiliency, justice, and bravery.

Are there rules for American flag tattoos?

The US Flag Code governs how the flag should be displayed and treated. Although there are no fines or penalties for not following the rules, certain things are considered disrespectful. For example, representing the flag being burned is a no-no. Also, even though a tattered flag might represent resilience to you, it could be an insult. Lastly, the US flag should not be covered with markings like brand names.

When it comes to placement, military etiquette says to place the flag on the right side of the body with stars facing the heart.

Where to place an American flag tattoo?

Many collectors prefer to place a flag tattoo on the arm or shoulder where it is prominently displayed. However, it really depends on the size of tattoo you want. If you’re feeling especially patriotic, you might want a full back or full chest representation. On the other hand, a small wrist tattoo might serve as a visible reminder instead. 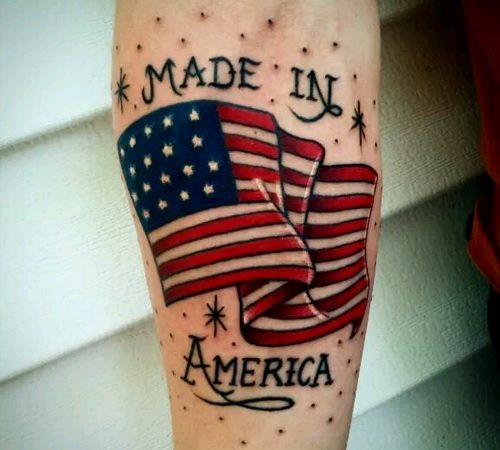 Any American can recognize the traditional design featuring the 50 stars and 13 stripes. To make it unique, consider adding custom elements such as lettering or imagery that speaks to the meaning behind your tattoo. 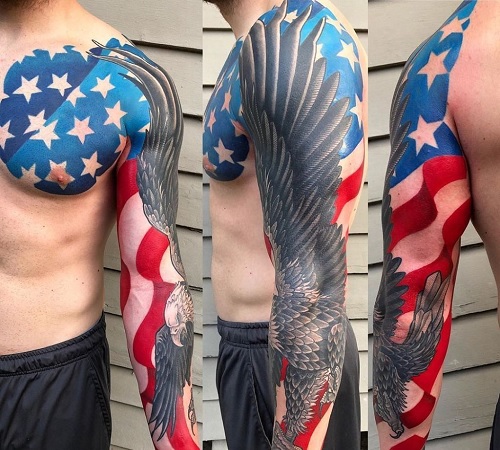 This bold American Flag tattoo with a bald eagle on the arm is a beautiful piece of art. Made with vibrant colors and incredible detail, this tattoo stands out as an ode to patriotism. With the flag emblazoned on the shoulder and arm, it is an eye-catching design. The bald eagle perched atop adds a level of grandeur to this stunning piece – its wings spread wide as it swoops down in glory. 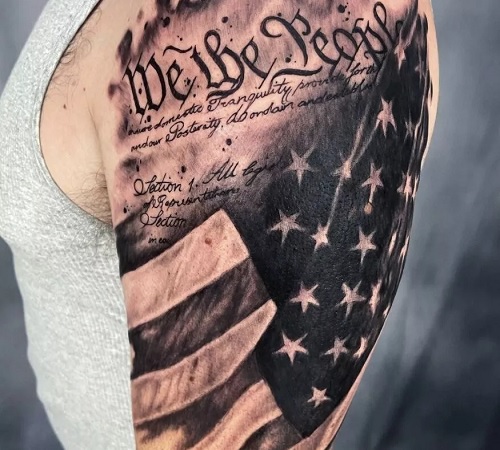 What happens when you combine two of America’s most famous symbols in one tattoo? You end up with ink that speaks for what you believe in. Here part of the preamble to the Declaration of Independence sits just above a black American flag tattoo. 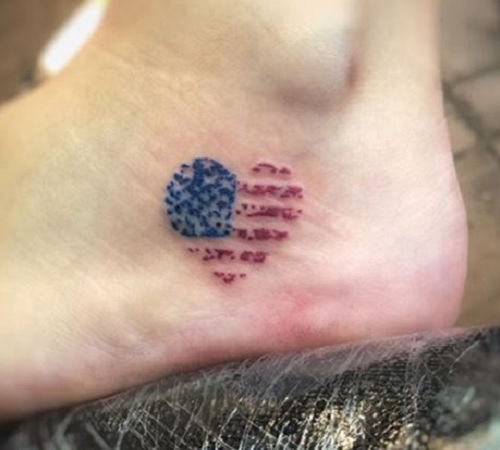 Show your love for your country with a cute, heart-shaped American flag. Putting it on a foot might have been just a decorative choice, but we’d like to think there’s a deeper meaning. Perhaps this person really stands for patriotism. 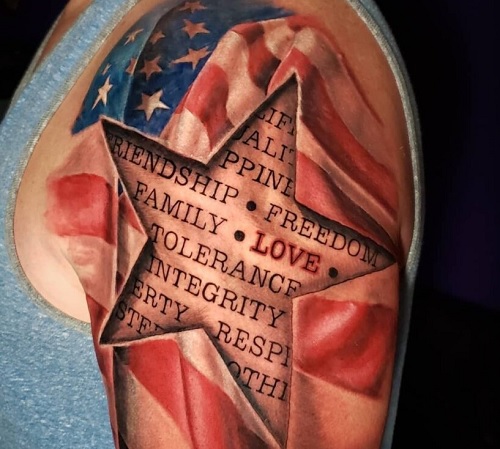 What’s behind the American flag? This symbol of national pride also represents deep values like friendship, freedom, and family. Then there are respect, integrity, and liberty – the things that truly make America great. The 3D depth of this gorgeous tattoo is sure to attract attention, too. 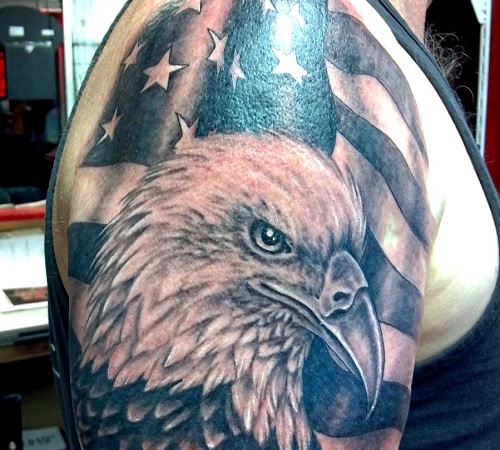 Is it okay to have a black and gray American flag? Does it always have to be red, white, and blue?

We’ve heard that this style shows respect for the military and those who have served. It carries great symbolism with its stark design, which marks a contrast between the patriotic red, white and blue along with gray to symbolize sacrifice. It’s used to honor fallen comrades or commemorate years spent in military service. It has even been spotted on non-military personnel as a sign of pride in our history and admiration for those who defended our freedom over the centuries.

American through and through tattoo 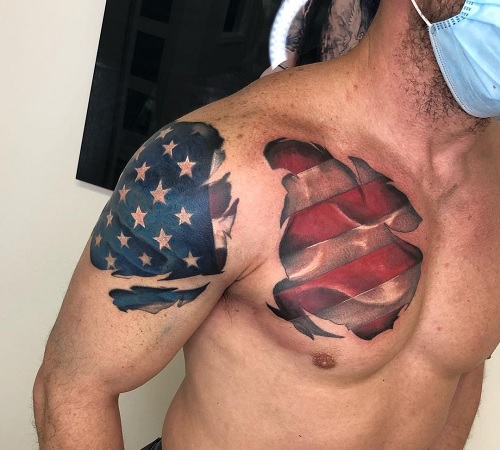 Who are you really underneath it all? When Clark Kent rips off his suit, he’s dressed as Superman. And when you see to the core of this person, they are a true blue American. 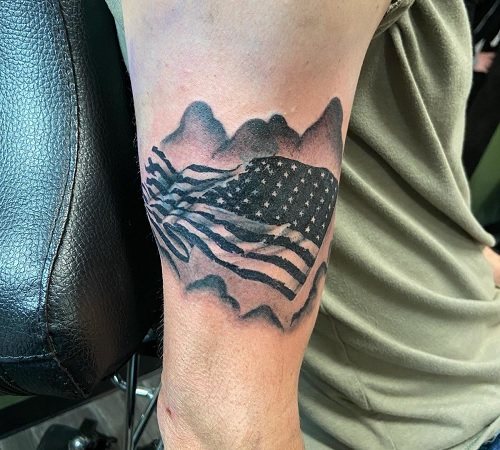 Why not combine your love for nature with your love of country? Here’s a flag tattoo with mountains in the background. It could represent home just as easily as it symbolizes strength and endurance.

A folded American flag tattoo for the fallen 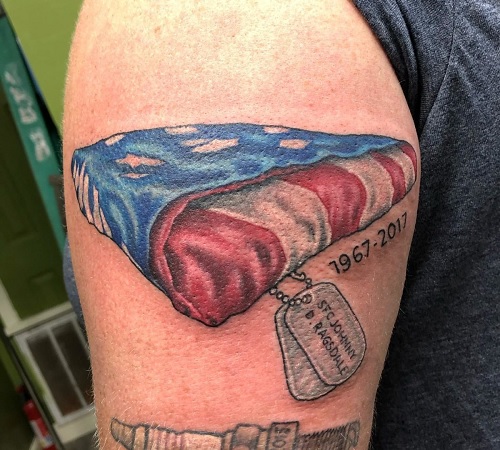 For many U.S. veterans and their families, the folded American flag is a powerful symbol to remember someone they loved and lost. A tattoo like this serves as a reminder that we should never forget our brave soldiers who have made the ultimate sacrifice for our country’s freedom.

Here’s more ink that honors the fallen. This design has a beautiful blooming rose. The rose is a symbol of beauty, love, and passion, but it also symbolizes inner strength or paying tribute to someone else’s courage during hard times.

American flag tattoo with a compass 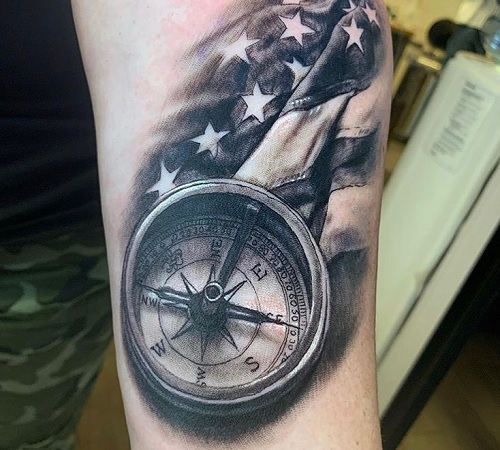 A particularly unique way to show your love for America is through an American flag tattoo with a compass. This symbolizes not just pride in the nation, but also the idea of exploration and journey – something that resonates with many people today. The modern-day explorer seeks to discover what lies beyond their current boundaries, and this is beautifully represented by combining a classic symbol of America with a compass. 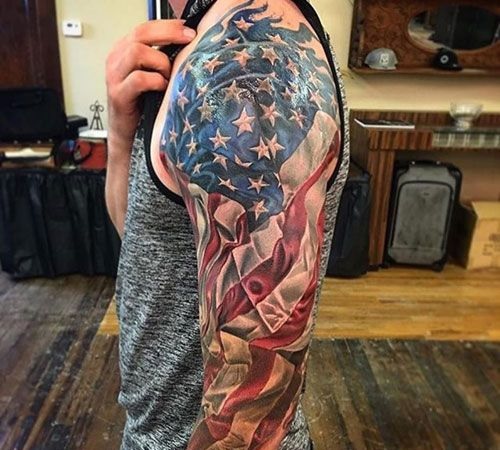 The ragged version of the iconic design often looks as if it has seen better days. It’s an intentional reminder that, although our country might be going through challenging times, we can still find hope in its undying spirit. The distressed look of the flag gives off energy and character. Some people may choose a red-white-and-blue colored design with frayed edges for the simple reason that they like how it looks, but many opt for this type of tattoo to represent their support for veterans and other members of the armed forces who have served our country.

American flag tattoos are a timeless way to show your respect and admiration for the United States of America. They are symbols of patriotism, bravery, and courage that can be proudly worn for the rest of your life. Whether you have served in the military or have family members who have, an American flag tattoo is a great way to honor them. Additionally, these tattoos can be designed in many different ways to create something that is meaningful and unique to you.