They are eye-catching, bold, and sometimes whimsical. The dark outlines and decorative details call attention to the best Neo Traditional tattoos. Enhance your beauty and express yourself with this stunning style.

What makes a Neotraditional tattoo different from American traditional and other styles? First, Neo-Traditional body art has more depth and dimension than American Traditional but less than New School tattoos.

Although Neo-Traditional tattoos often have bold black outlines, the thickness of the line can vary. It’s a more illustrative style.

And when it comes to shading, highly saturated and colorful Neo-Traditional tattoos look more realistic than the flat American Traditional style, incorporating greywash and white highlights, too. 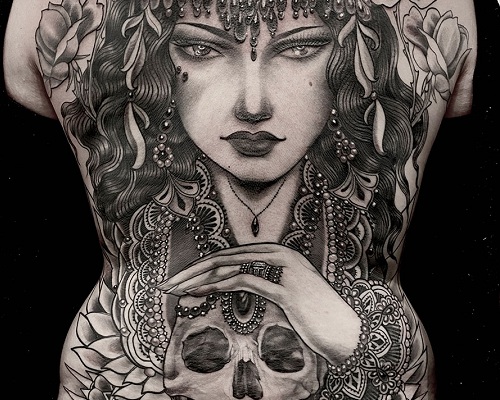 Check out this gorgeous example of a Neo-Traditional black and gray tattoo. This is ink that’s beautifully clear from a distance, a distinctive hallmark of Neo-Traditionalism.

The tattoo was created by Miss Juliet, one of the best Neo Traditional tattoo artists, who’s based in Manhattan. The luscious details of the beads and finery are often seen in Neo-Traditional Art as well as the themes of beautiful women, skulls, and floral patterns.

Portraiture is also often done in the Neo-Traditional style. 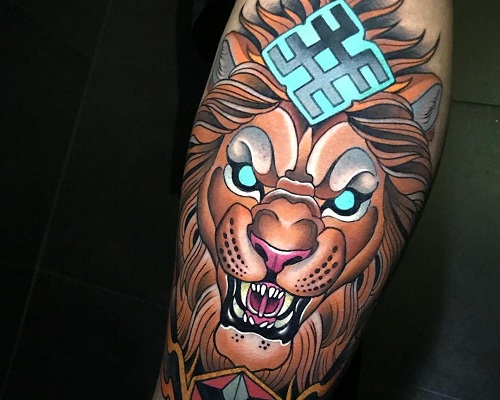 One of the best features of Neo-Traditional art is that they are a fusion of styles. For example, this lion tattoo incorporates geometric flourishes that add to the meaning behind the animal’s representation. By themselves, lions represent fierceness, bravery, control, and the courage to defend what is yours and take what you need.

Also, notice that the color palette of the Neo-Traditional style is much broader than American Traditional. 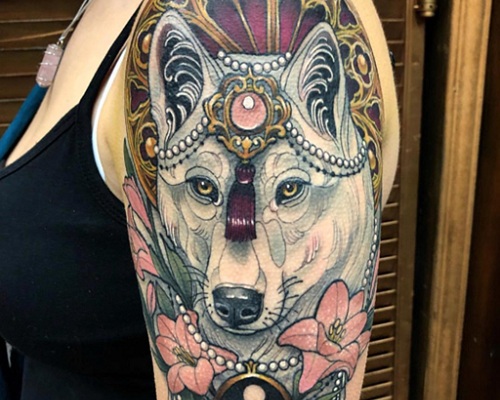 It’s hard to resist this fancy wolf depicted on a Neo-Traditional tattoo sleeve. The wolf can symbolize power, cunning, a strong personality, and persistence. But with all the intricate Victorian illustrations, this wolf looks like the wise matriarch of the pack. 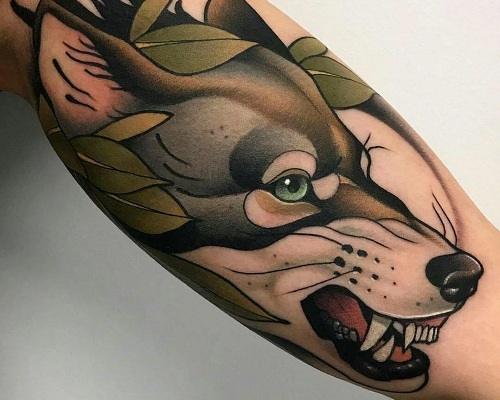 Compare the stately wolf above to this wild wolf that’s practically leaping off the collector’s arm. It’s a spectacular example of Neo-Traditional body art that takes advantage of the body’s form to give it shape and make it more life-like. 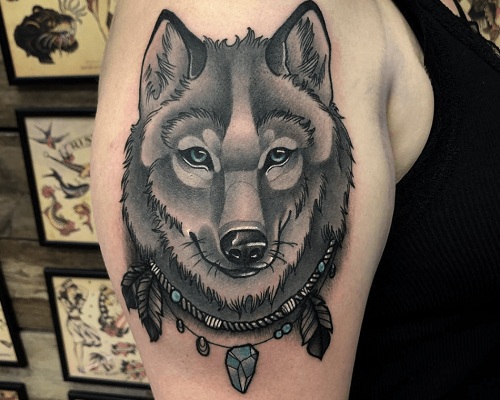 It looks like a wolf, but maybe it’s a Husky. Just look at those kind blue eyes and the decorative tribal collar. It’s common to see pet tattoos done in the Neo-Traditional style. 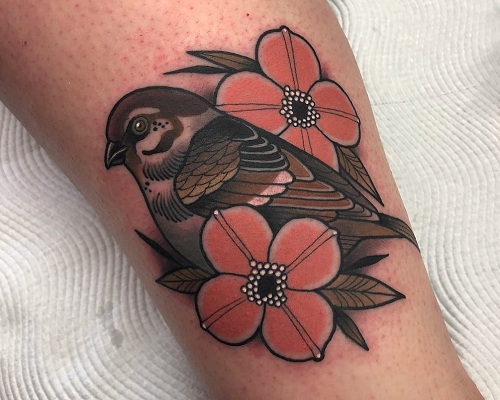 Birds like crows, owls, and eagles are often the subject of Neo-Traditional body art. We also like sparrows, the symbol of care, protection, love, creativity, and a free-flying personality. 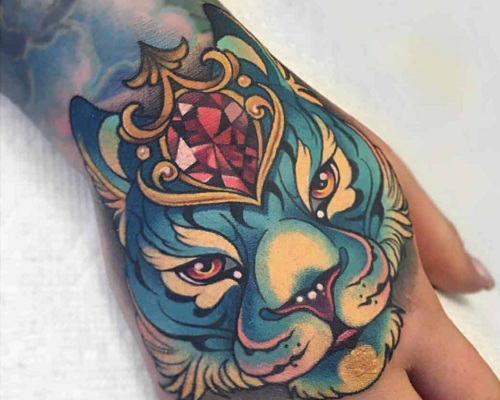 The lush colors of this tiger tattoo emphasize its bold position on the top of the hand. Be careful with this predator for she is strong and will fight if necessary. The jewel of wisdom on her brow shows that she is no fool. 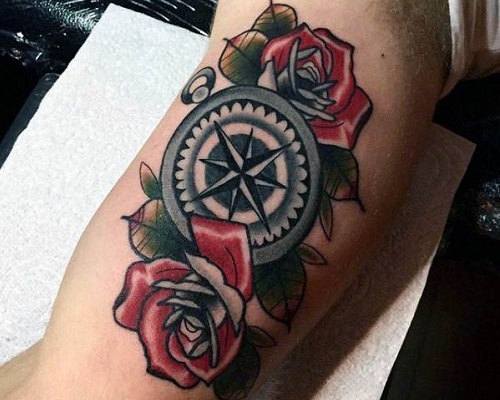 Roses aren’t the only flower in Neo-Traditional designs, but they represent promise, passion, and true love. Perhaps the person chose the compass to accompany the rose to show off their devotion to someone. Pure love will always guide the way. 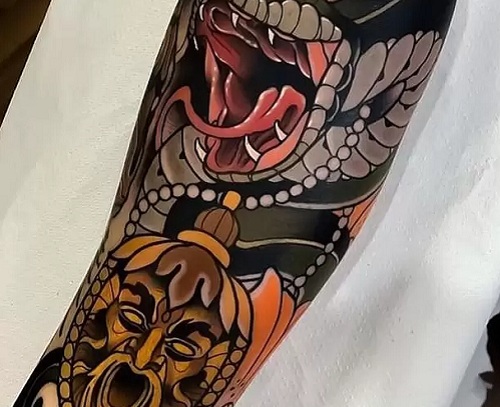 Can you tell that Japanese irezumi has also influenced Neo-Traditional tattoos? This snake sleeve tattoo is an excellent example. It’s nestled around the tribal traditional mask below and encircled by decorative beads and geometric designs. The bright colors, perfect depth, bold lines scream for attention.

The snake is a symbol of defense as it will fight to protect itself but is not normally aggressive unless endangered. However, the cobra tattoo here looks downright threatening. It says, “Don’t even think about messing with me”. 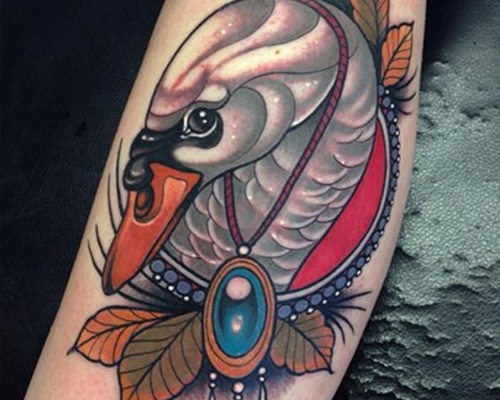 Why would someone get a swan tattoo on their leg? When compared to ferocious tigers, audacious wolves, and sagacious snakes, a swan seems so tame. However, this is no Mother Goose tale. Remember that multi-talented swans can both fly and swim. Therefore, they are symbols of elegance and gracefulness. They also represent good luck, romance, loyalty, kindness, devotion, and prosperity.

What’s the story here? It’s a Neo-traditional message in a bottle complete with floral accents and ship masts and seagulls in the distance. We’d love to know what this design represents to the artist and the collector. At any rate, it’s an attractive tattoo all on its own.

Where to place a Neo-Traditional tattoo?

The detailed style looks best in a place where there’s enough space like a sleeve on the arms, the back, the chest or the legs. Keep in mind your tolerance for pain because some areas – like the rib cage – are very sensitive. Moreover, you may need to get the tattoo done over multiple sessions.

Where to get more Neo-Trad tattoo ideas?

The conventional source for body art ideas is tattoo flash found in books or online.

If you’re an artist, you could take American Traditional flash and give it additional depth, a broader color palette, and more illustrative details to turn it into Neo-Trad art.

How much does a Neo-Traditional tattoo cost?

The cost of a tattoo varies widely depending on the design, but since Neo-Traditional tattoos tend to be a little larger, plan on $200 and up. A highly detailed sleeve tattoo with an original design may cost $1000 or more. Plan ahead by contacting the tattoo studio and getting an estimate before you go.

Why should you get a Neo-Traditional tattoo instead of something else?

One downside of getting a tattoo is that skin ages, becoming saggy or crepey. People gain weight, they lose weight, and their skin sheds, too. In other words, the body canvas is in constant flux and it degrades over time. On the bright side, Neo-Traditional tattoos are bold, vibrant, and clear. They are likely to maintain their beauty for decades to come and require few touchups if any.

Not to mention that the Neo-Traditional style is flexible, versatile, and downright spectacular. It makes for the kind of body ink that people absolutely cannot ignore. If you want your tattoo to make a statement, you can’t go wrong with a Neo-Traditional design.