Did you know that owl tattoos are one of the most popular animal designs? It’s not surprising because owls in real life inspire both admiration and fear. These silent hunters can see tiny details far away in the dark and turn their heads almost 360°.

What’s more, the depth of thought going on behind those slowly blinking eyes has given owls a reputation for wisdom. That’s why owl tattoos symbolize intelligence and knowledge as well as fearsome courage. 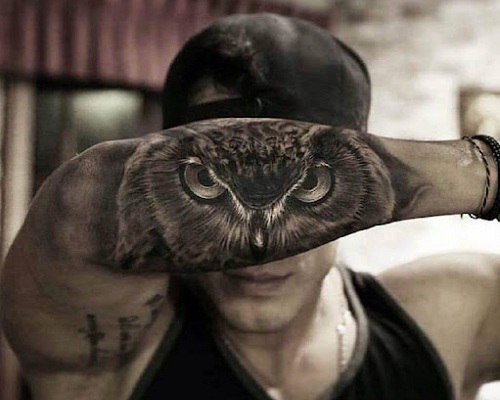 So why do guys get an owl tattoo? There are as many reasons as there are owl species.

For example, owls represent stealth and The Hunter. Plus, they also symbolize freedom, independence, vision, and intuition.

Beyond that, owls stand for wisdom, intelligence, mystery, and knowledge.

And even today, owls can be a symbol of death, magic, and the supernatural.

Owl tattoos come in all sizes, shapes, and styles. They can be placed anywhere on the body, but we prefer it when others get to see them. That’s why we hunted down the best owl tattoo ideas. Here’s inspiration and a gallery for guys below.

Owl tattoos in history and mythology

Owls appear in the mythology of many different cultures throughout history. Throughout ancient Egypt, for example, there were many statues of owls and they were mentioned many times in hieroglyphics and other writing systems. In fact, the letter M was represented by an owl.

In writing, the ancient Egyptians were careful to differentiate between different species of owls. This might’ve been because Ramses II preferred the large and powerful horned owl over the little night owls. This Pharaoh owl had hearing ten times better than humans and was completely soundless in flight.

But it was the little night owl with its mournful hoot that gave ancient Egyptians chill bumps. They believed that it could be the spirit of a dead person wandering at night as an owl with a human head. Therefore, sometimes owls were viewed as bad luck.

In Roman mythology, an owl was the angel of death that escorted the shades of the living to the underworld. If one hooted in front of you, it could be predicting your end or the departure of someone important to you.

Some Native Americans looked to owls as weather forecasters and protectors of sacred knowledge. Some tribes also believed owls were harbingers of death. If you dreamed of one, it meant you or someone else was going to die soon, but the owl would watch over you in the next life. 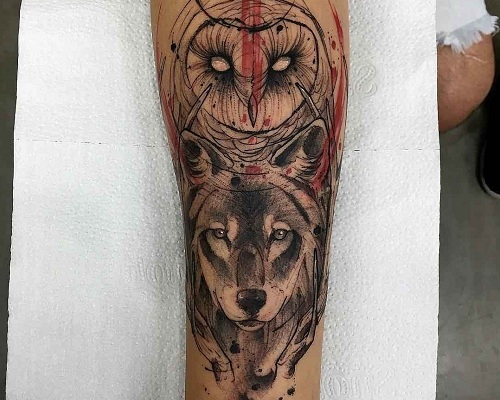 Everyone has their favorite style of tattoo: American traditional, Neo-Traditional, New School, and Japanese irezumi are just a few of the options. As you consider what kind of owl tattoo you want, think first about the meaning. What are you saying with the ink? The style can help you express yourself more fully.

Is the owl there to impress others or act as a reminder for you? Oftentimes, both reasons factor into a decision. Still, the answer will affect where you place a tattoo, whether it’s big and bold with wings spread across your chest, or discreetly inked elsewhere.

Will the owl be in bold black linework like a geometric or tribal design? 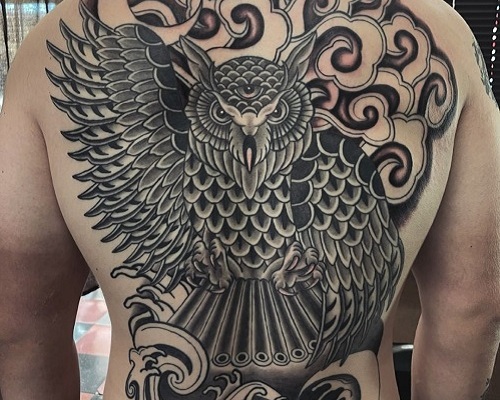 The Japanese-style horned owl above has a third eye and outstretched claws. What do you think it means?

What about this realistic horned owl sleeve tattoo? It looks calm and non-threatening, but one never knows what’s going on behind those eyes. 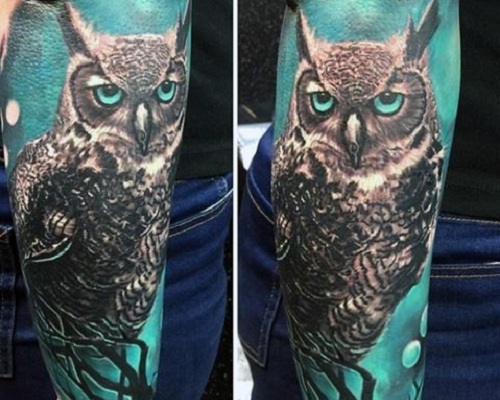 Consider what imagery you might want with the owl. Perhaps the owl is swooping down with the moon high in the sky behind it. Or maybe it’s perching on a branch with eyes searching for prey. The setting is important – it’s not just decoration.

Check out this stunning steampunk design below that should strike terror into anyone’s heart. What would you do if a giant owl was glaring through a rose window (made of flesh) at you? 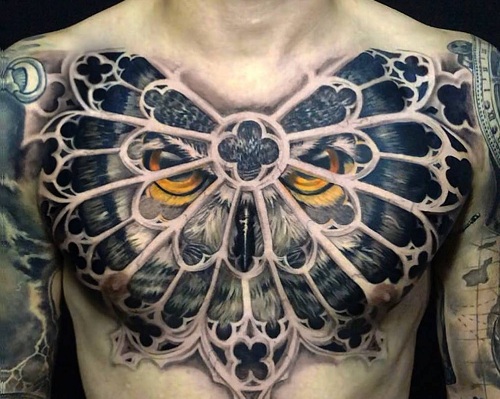 Then, there are the burning, soulless eyes of this New School owl below. It’s a sleeve tattoo with an intriguing placement. This stealthy weapon isn’t going to be visible unless the guy has his arm outstretched. We love the comic book style and color palette. 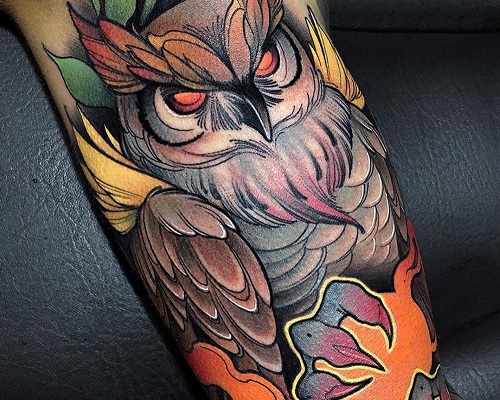 Owl tattoos aren’t just about intimidation. They can also be calm and rather cute like the little guy here. It’s a contemplative owl that reminds us about how many licks it takes to get to the center of a candy lollipop. 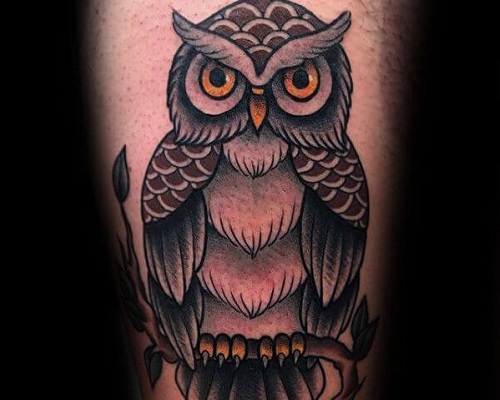 Watercolor owl tattoo on the back

We love this watercolor barn owl in flight with outstretched wings trailing a rainbow of color. Not scary but inspiring. This could be an owl of transformation or freedom. Just imagine the reaction this guy gets when he takes off his shirt.

Black and white owl on a finger 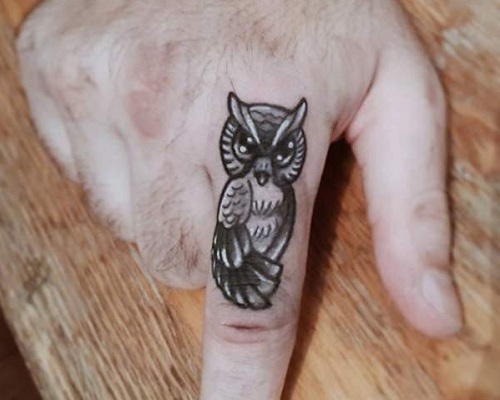 Put a wise little owl on your finger. Then use it to point out your strengths and uncover the deceptions and mysteries around you.

How much does an owl tattoo cost?

There’s no way to say for sure how much an owl tattoo will cost until you decide a few things.

Think about how big you want it to be and how colorful.

Will you bring a design with you, choose tattoo flash from a book, or collaborate with the artist on something new?

When you consult with the artist, they will take all these factors into consideration and give you an estimate. Please remember to add in a tip if you love your new ink and had a good experience getting it.

In the USA, a three-inch square black and white design might run around $150 but a full-color sleeve with an original design might cost as much as $3000.

Where to get an owl tattoo?

If you’re not sure where to go but you know people with amazing tattoos, ask where they went. Scroll through Instagram and check out the local tattoo studios online to see reviews and artist portfolios. But most importantly, visit the tattoo parlor and meet the artist to arrange your masterpiece.