The turtle has been a powerful symbol of protection, stability, and perseverance throughout many cultures. Due to their long lifespan, turtles often symbolize patience, wisdom, endurance, and good luck. They are known to be positive symbols for healing and growth in different cultures around the world.

If you’re looking for a way to express yourself through ink, then get inspired by the top turtle tattoo designs. 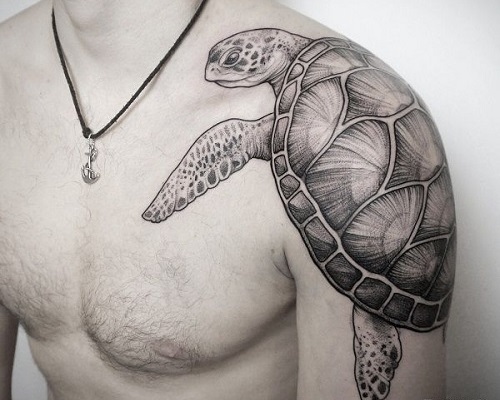 The meanings behind turtle tattoos

Turtles appear in archaic art all over the world. In different cultures, turtles symbolize different meanings. For example, ancient Egyptians had a unique relationship with turtles, seeing them as an ambiguous force that balanced both land and sea. Representing the duality of life, they were linked to both the sun and moon’s energy, signifying the importance of balance in daily practice.

Turtles appear as totems in creation stories and Dreamtime tales in Indigenous cultures. And in Buddhism, turtles are prayers to find meaning in life.

Among the Celts, turtles signify safety and being in touch with the Earth. And in the Mayan culture, turtles support the world.

What will your turtle tattoo mean to you? 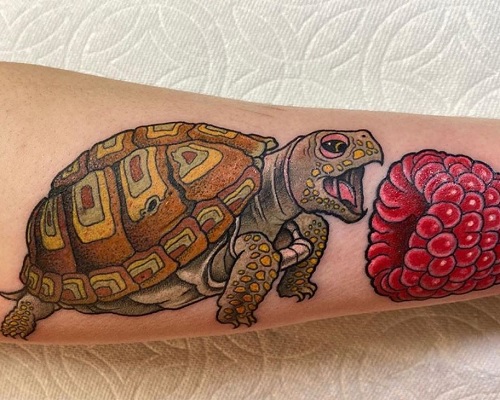 Which kind of turtle best represents your personality? 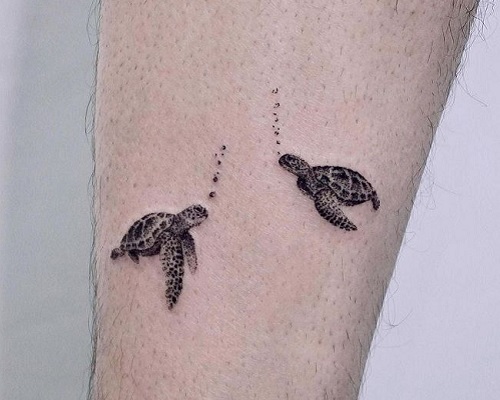 There are all sorts of cute turtle designs, from little tattoos for your hand, wrist, or foot to large and colorful cartoon turtles. Check out these little sea turtles chatting with each other.

Gotta love this cheerful sea turtle! It’s downright adorable and sure to be a conversation starter. 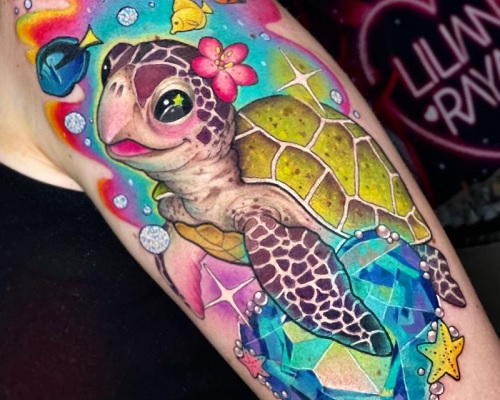 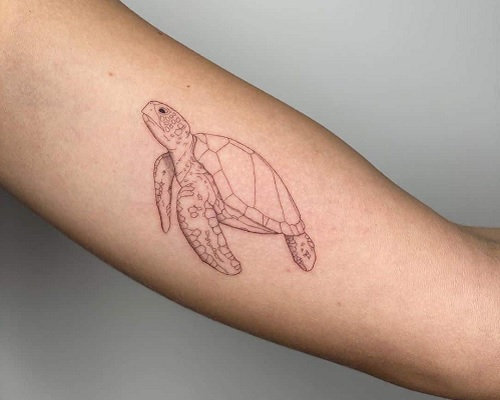 If it’s your first tattoo, there’s nothing wrong with keeping it simple. A minimalist tattoo like the one below hurts less than a tattoo with lots of color and shading. It will also heal faster. 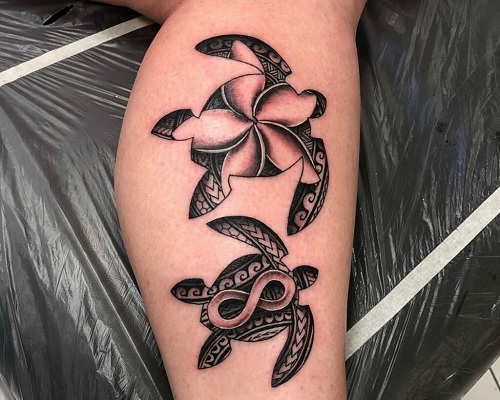 Among the Hawaiians, sea turtles are sacred. They symbolize stamina, protection, good luck, and long life.

The geometric turtle tattoos below have a depth and level of detail that’s simply gorgeous. They look tribal, don’t they? 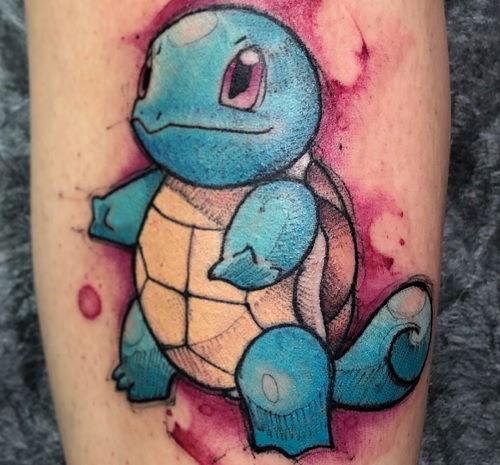 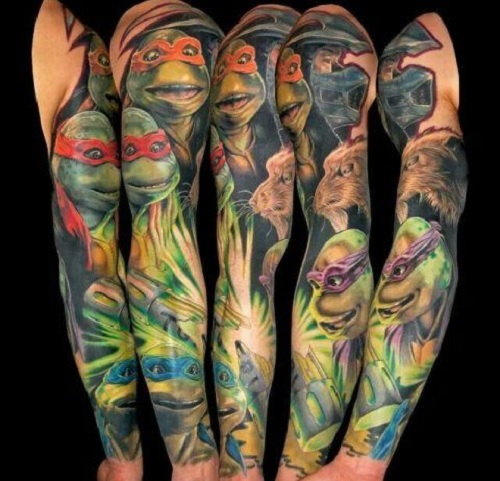 Donatello, Leonardo, Michelangelo, and Raphael are ready to take on the bad guys! It just goes to show you that turtles are an essential part of modern pop culture, just like pizza.

Turtle with a sword tattoo 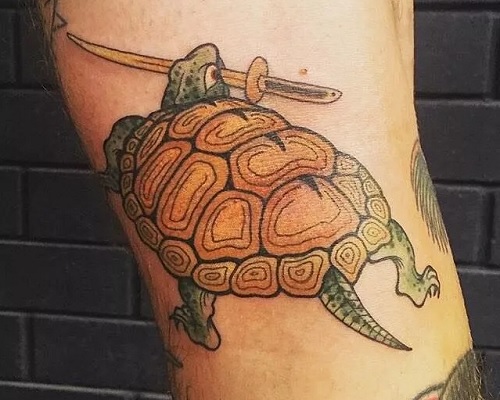 It’s not just TMNT that are ready to fight. Maybe this guy’s looking for Splinter to give him lessons? 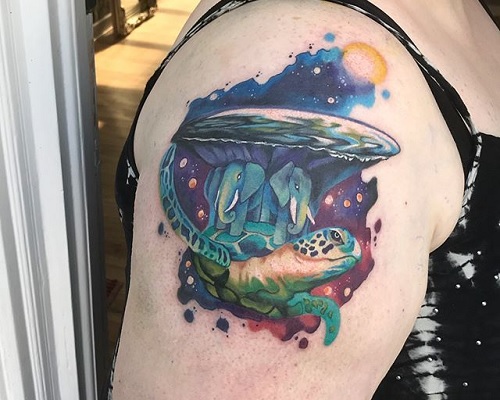 Because it’s turtles all the way down…If you’re a Terry Pratchett fan, there’s a turtle tattoo for you, too.

This one is inked in a style called New School. It looks a lot like a comic book. 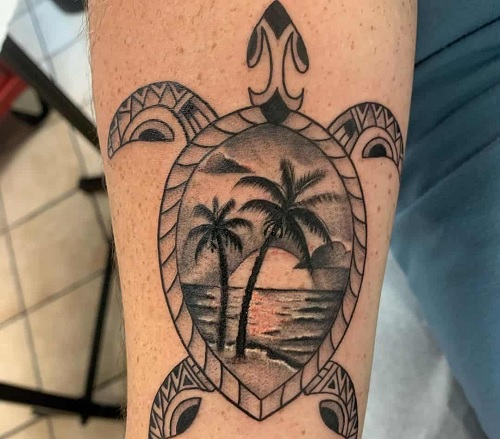 Can you hear the waves on the shore? Can you taste the coconut? This Polynesian turtle is part of a unique tribe of modern designs. They blend old and new, tribal geometrics with recognizable scenes. 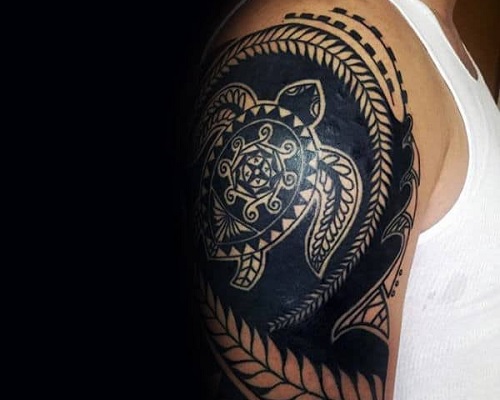 Blackwork is a stunning tattoo style. It’s bold and primitive. Plus, it’s also handy for covering up old tattoos. 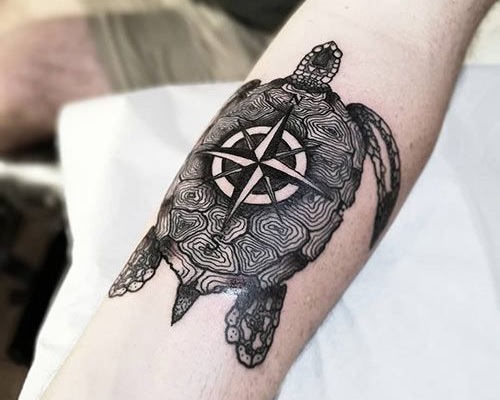 Wherever you’re headed in life, remind yourself to stay true to your course and have the stamina and persistence of a turtle. Remember the fable of the tortoise and the hare? The tortoise won. 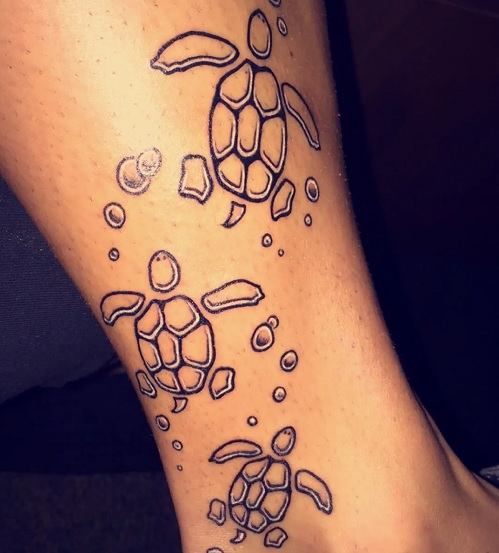 Represent family bonds with a family of turtles tattoo. Okay, so maybe turtles don’t rear their young, but they do sacrifice a lot for them. 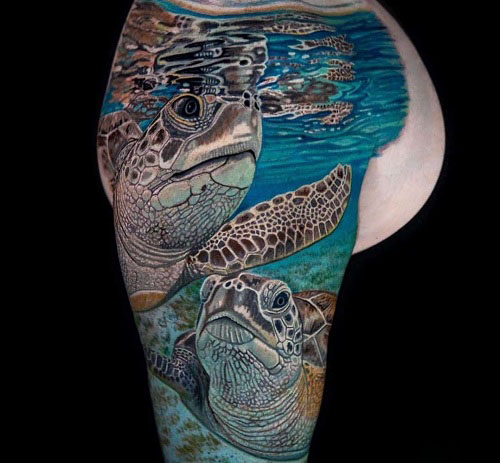 3D turtle tattoos capture the beauty and grace of these creatures in amazingly detailed lifelike depictions. The incredible detail of this turtle sleeve tattoo is downright breathtaking.

Where to place a turtle tattoo?

The most common place for people to get a turtle tattoo is along the arms, shoulders, or legs. For those who want something more discreet, a small turtle tattoo can be placed on the wrist or ankle in order to draw attention only if desired.

Some parts of the body are more sensitive than others. It might be difficult to get your first tattoo on a foot or the ribs, for example. It’s more comfortable to get inked on an arm or leg.

The easiest way to decide is to think about whether you want to show off the tattoo or keep it to yourself. Then take into account how big it will be. Once you make these choices, you’ll know where to get inked.

How much does a turtle tattoo cost?

At the time of writing, a small tattoo under two inches square runs anywhere from $30-$100. The amount depends on the color and amount of detail, where it’s placed, whether it’s from flash or an original design, and the fame of the artist. Then, a larger tattoo around four inches square will run around $250 and up.

How to find an artist that does turtle tattoos

Most artists can do a turtle tattoo but they may not create the type of design you want. There’s nothing wrong with asking to see an artist’s portfolio – it’s not an insult, but a chance for the artist to show off their best work. See if their style suits the image you have in mind.

Along with seeking a skilled artist, it’s also smart to check the conditions of the tattoo shop. Is the artist licensed? Are the facilities sanitized and safe? If you have sensitive skin, find out what type of ink they use. (Some colors contain nickel which may cause an allergic reaction).

A turtle tattoo is a meaningful tattoo that will last a lifetime. Whether you’re looking for an inspirational piece of art to commemorate a special moment in your life or simply want something that captures the spirit of resilience, the turtle is a meaningful design. With its symbolism of patience, wisdom, endurance, and good luck, it’s no surprise that this iconic image continues to be popular year after year.