Although most humans don’t worship the sun and moon anymore, both have a big impact on our daily lives. It’s not only the science of sunlight and the tidal pull of the moon that affect us. Both celestial bodies have a lot of symbolic significance. Therefore, it’s not at all unusual to see sun and moon tattoos on people around the world.

What do sun and moon tattoos symbolize? The answer depends on the culture, the style, and the structure of the image. In this article, we’ll explore the best sun and moon tattoo designs and what they mean. Although each symbol may have different meanings, they are often depicted together.

What do the sun and moon together mean? For many collectors, a tattoo with both the sun and the moon signifies union. In other words, they represent opposites that are bound together, like feminine and masculine or yin and yang.

For example, here is an abstract sun and moon tattoo. The sun and moon are at opposite ends balancing each other and interconnected with a geometric pattern.

But both celestial elements also symbolize a cyclical nature of transformation and rebirth. That’s why linking them with koi fish is an intriguing design choice. Koi represent longevity, ambition, good fortune, and perseverance as well as rebirth and balance. 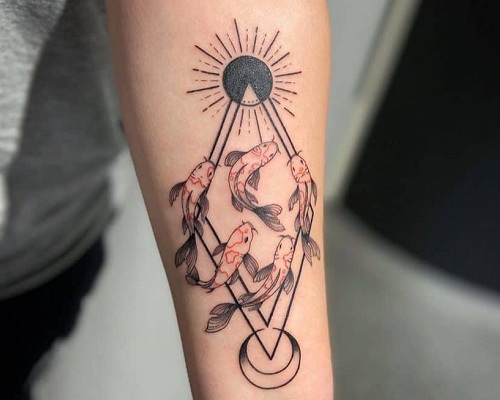 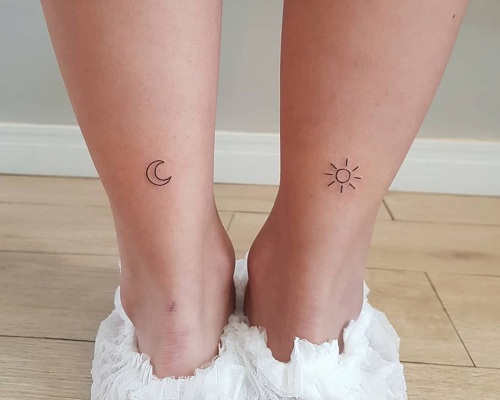 Is there a matching sun and moon tattoo meaning? At their simplest, the corresponding symbols indicate balance. The linework tattoo below places one on each leg and neither is more important or larger than the other. 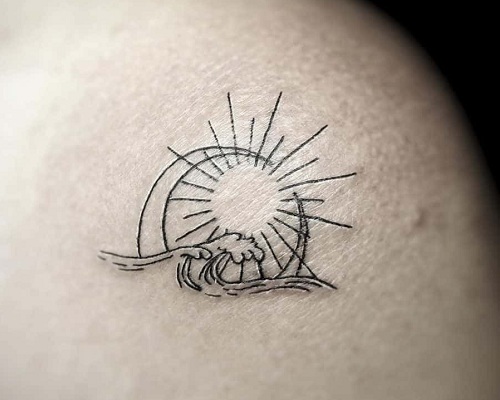 We love the use of negative space in this minimalist sun and moon tattoo. It merges the sun within the crescent moon’s embrace. The frothing waves make us think that this person might be a surfer and would spend all their time from sun up to moonrise on the ocean. 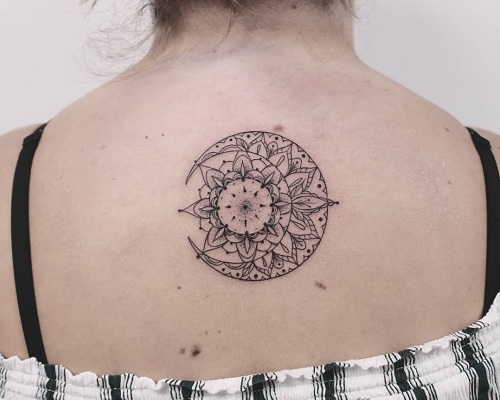 You’re likely to run across a mandala or dreamcatcher design with an abstract sun and moon like this tattoo. The dream catcher is a guardian empowered by the moon and sun, keeping evil at bay all night and day. 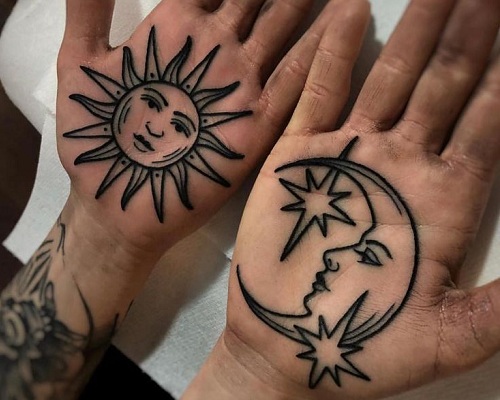 In this Old School sun and moon tattoo, the thick black lines and uncomplicated image present both bodies with female faces. These are not necessarily tattoos for lovers, but symbols of balance leading to contentment. The sun is the ego, the leader, and the ambitious one. Meanwhile, the moon is intuitive, emotional, and calming. Put them both together and live a balanced life. 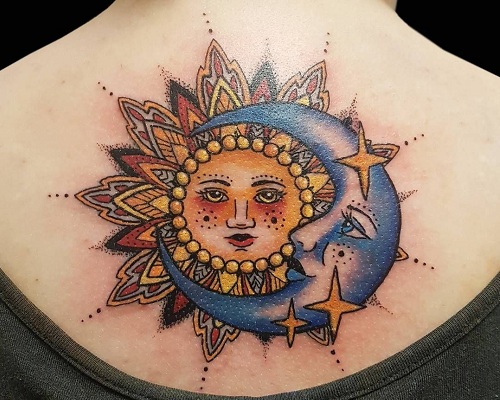 Once you’re familiar with different tattoo schools of design, you can see that this one is done in the Neo-Traditional style because it’s highly decorative and has more depth than the 2D linework tattoo above.

Again, both the sun and moon have feminine faces. If they are lovers, then the relationship might be unbalanced because while the moon adores the sun, the sun has her mind elsewhere. In any case, this is a gorgeous tattoo. 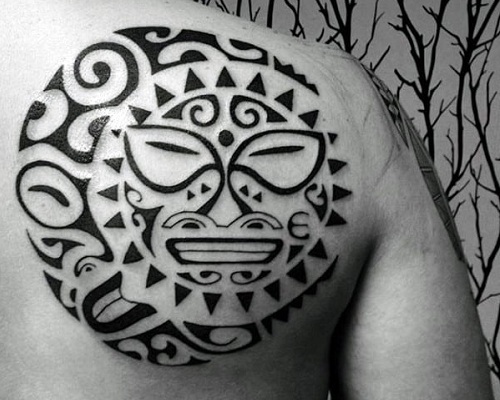 Here’s a tribal sun and moon tattoo for guys. Look closely and you can see the moon encircling the sun. Both have faces resembling tiki masks. It’s true that ancient Polynesian cultures aren’t the only ones that worshiped the sun and moon. You can find evidence that people around the world believed that these light-givers were deities.

Ancient Egyptians thought the sun was the god Ra, while the Greeks called him Helios and the Hindus said he was Surya. But the Norse said the sun was a goddess named Sol. It was her brother, Mani that was the moon god.

But don’t forget the Aztecs, Incans, Mayans. Celts, Chinese, and Romans all gave the sun and moon their due. 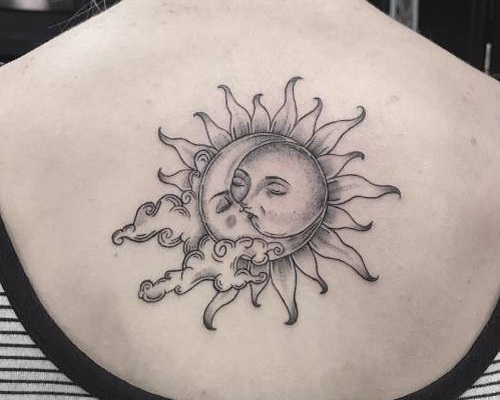 This is a charming kissing sun and moon tattoo. All the romance happens during the eclipse, the only time the lovers can be together. During the brief moment of union, they are no longer separated in the sky. We can’t think of a better way to honor our relationship or declare your romantic personality.

The sun and moon tattoo has meaning for couples, especially if one carries the sun tattoo and the other the moon placed so that they fit perfectly together. 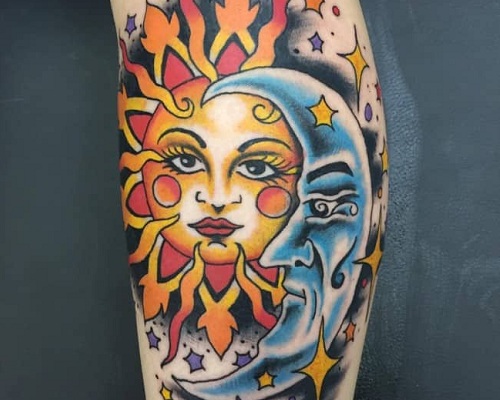 New School tattoos look like comic book art. Here’s the man in the moon right next to his flaming princess the sun. The bright colors in the limited palette still show off exemplary shading and a masterful sense of depth.

We could almost swear that the rose is real – or at least a photograph. Each petal is perfect. Then we noticed the delicate rays that turn it into the sun hovering above a crescent moon filled with a solar system of planets. This is truly a spectacular and unique sun and moon tattoo. 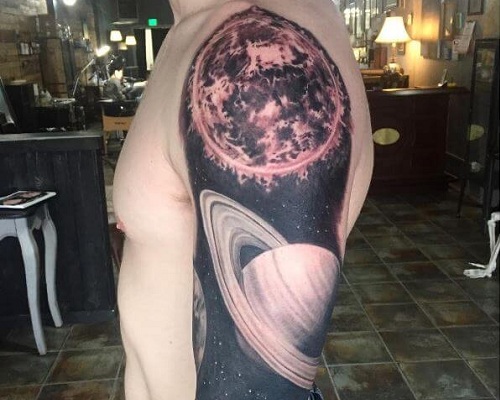 How about this 3D solar system tattoo complete with coronal mass ejections sprouting from the sun? We think that the next moon tattoo below would be an ideal image to ink on the other shoulder. 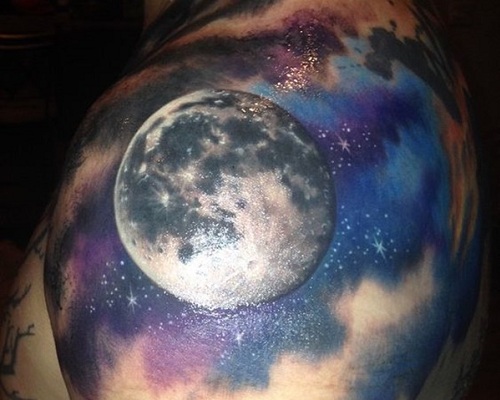 Unfortunately, this hyperrealistic moon tattoo isn’t on the shoulder of the guy above. We hope he considers getting something similar on the other side. Check out the maria and craters which are accurate down to the last detail. Look, you can identify Tycho, the bright circle like a belly button near the bottom, as well as the Kepler crater and the Sea of Serenity. 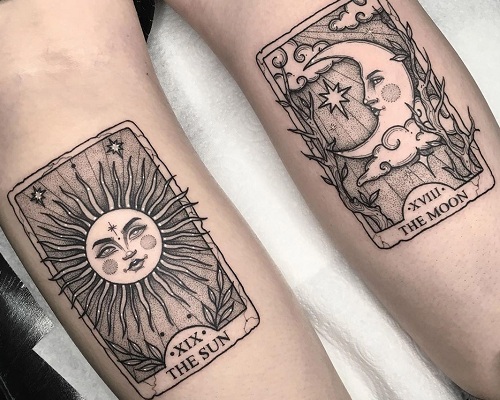 The fine linework and shading on these black and gray tattoos are simply amazing. So why would someone get tarot cards of the sun and moon tattooed on their legs? Well, here the sun represents good fortune, joy, liveliness, genuineness, and confidence. It has no negative or reverse meaning. On the other hand, the moon is a symbol of illusion as well as strife and confusion. If you pull the moon tarot card, it’s time to access your innermost self and use intuition to discover and accept all that you are.